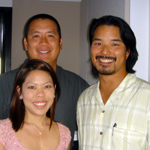 Kenwei Chong had an once-in-a-lifetime adventure he wants everyone to experience.

Wanting to take a break, Mr. Chong flew from his job as a financial manager to the other side of the world in 1996. His four-month trip to Southeast Asia has become a 15-month long adventure.

Listen to Kenwei Chong as he talks about his travel quests in India, Vietnam, Thailand and other parts of the orient where he acquired his inspiration for his new passion, food.

Now the managing partner of E&O Trading Co.’s first branch in Hawaii, Mr. Chong has come a long way from being a financial analyst and owner of Box To Go and FileMinders, and he has his travel experience to thank for.

He also shares with us the GIFT Foundation of Hawaii’s role in supporting charitable organizations directed towards youth education and wellness initiatives.

Listen to Greater Good Radio’s interview with Mr. Chong with his experience in finance, food and foundations.

• Graduated from Punahou in 1986
• Graduated from Boston University with a degree in Finance in 1990
• Earned his Chartered Financial Analyst designation in 1995
• 1990-1997: Portfolio Manager at The Chase Manhattan Bank, NA, in New York City and with Jenson and Company in San Francisco
• 1997-2001: Head of Product Development at Bloomberg Capital Markets overseeing Asia Pacific
• 2001: Moved home to Hawaii with family for a change of pace
• 2001-2005: Partner and CFO of Box To Go, LLC, Hawaii’s largest transportable self storage and commercial records storage business
• Sold Box To Go, LLC in January 2005
• Took active role in E&O Trading Company in late 2004. Opened E&O Trading Company, Honolulu at Ward Centre in March 2005. Planning to open E&O Lahaina in March/April 2006
• Brings sound financial experience to his endeavors through his eleven years spent in the capital markets managing mutual funds and designing financial risk management models
• Married with two daughters, Amber, 7, and Alexa, 5
• Serves on Board of Directors for The Hawaii Theatre and The GIFT Foundation of Hawaii, two local 501c3 organizations and Langtry Estate and Vineyards.