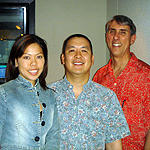 Richard “Dick” Gushman is Chief Executive Officer of DGM Group, one of Hawaii’s leading real estate development firms. Dick Gushman has owned and developed projects throughout Hawaii, the US mainland and Guam over the past 30 years. His latest real estate venture includes the Waikiki Beach Walk, a multi-million dollar retail complex, co-developed with Outrigger Enterprises, Inc.

Dick is currently a trustee of the Estate of James Campbell, a $2 billion diversified real estate company, headquartered in Honolulu with investment real estate all over the United States, as well as significant holdings in Hawaii. He has also maintained a multi-faceted role in the community as member of different organizations including United Way of Washington, Aloha United Way, Boys and Girls Club of Honolulu, and University of Hawaii Foundation.

Dick experienced his first taste of the Hawaii weather in 1971 as a merchant seaman on a marine research ship. In 1972, he came back to the Islands and started working through the real estate licensing process. A year later Gushman started his own real estate company.

Greater Good Radio brings back a man of vision and principle. In this interview, Dick Gushman talks about his humble beginnings in real estate development and how he has formed a small company in to an empire. He also gives advice to young entrepreneurs about finding balance in life and career and how this can translate to establishing fulfillment as an indelible member of the community.

All these and more only on Greater Good Radio.

Richard W. Gushman, II was born in Washington, DC in 1946, and raised in Lima, Ohio, where he graduated from Lima Shawnee High School as a scholar athlete. He attended Ohio Wesleyan University as a philosophy major and was an all-conference outside linebacker. In 1967, Mr. Gushman’s education was interrupted for two years of military service in the United States Army. He was honorably discharged in 1969 at the rank of Staff Sergeant E-6. Upon his discharge, Gushman was accepted into the School of Real Estate and Building Industry at the College of Business Administration, University of Denver, where he stayed for one additional year, from 1969-1970.

Dick Gushman’s real estate career began early. From the beginning, his family environment was oriented towards real estate and development, as both of his parents were active in the business. His mother was a trained architect, graduating from Ohio State University, and his father was a developer and general contractor. Mr. Gushman began working on construction projects for the family at age 12, and stayed in the construction trades during high school and college. Before moving to Hawaii in 1972, Mr. Gushman, a licensed securities salesman, sold real estate investment trust shares and worked on commercial real estate leasing and development projects.

In 1972, Gushman began his real estate career in Hawaii as a development project manager for the McCormack Land Company, then Hawaii’s largest residential brokerage company. In 1973, he left to start his own development practice, and which, sometimes partnering with other real estate investors and developers, has continued for over 31 years.

Besides running OKOA, Inc., his diversified real estate company, Mr. Gushman’s non-real estate activities include: managing partner of Summit Financial Resources, a Salt Lake City, Utah based financial services company; chairman of the board of 13 SEC-registered mutual funds under the Pacific Capital Fund group of assets, administered and advised by the Bank of Hawaii; and chairman of the investment committee for mutual funds administered and distributed by the Aquila family of funds in New York. He is a director of Time-Warner’s’ Hawaii’s subsidiary of Oceanic Cablevision, Servco Pacific, Outrigger Enterprises, Inc., American Savings Bank, and Pomaré, Ltd., the world’s largest manufacturer and wholesaler of Polynesian fabrics and apparel.

In addition, Mr. Gushman has always been dynamically involved in the non-profit and philanthropic community. Activities over the years or currently include director and chairman of the investment audit committee of United Way of America in Washington, chairman of the board of Aloha United Way, chairman of the board of Boys and Girls Club of Honolulu, trustee and chairman of the investment committee of the University of Hawaii Foundation, trustee of Hawaii Pacific University, 8 years as president of the Downtown Improvement Association, current chair of the Fort Street Business Improvement District Association, and a member of the Department of Hawaiian Home Lands Advisory Board.

Mr. Gushman is currently a trustee of the Estate of James Campbell, a $2 billion diversified real estate company, headquartered in Honolulu with investment real estate all over the United States, as well as significant holdings in Hawaii.