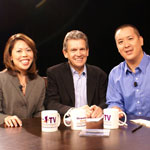 Admiral RJ “Zap” Zlatoper’s work life spans four different careers, a verification of his versatile and well-rounded mindset. Admiral Zlatoper was a former commander-in-chief of the U.S. Pacific Fleet, the world’s largest naval command encompassing half the Earth’s surface, and including more than 190 ships, 1600 aircraft, and 200,000 personnel, with an operating budget of $5 billion per year.

After a distinguished naval career, he became co-chairman of the board and chief executive officer of Sanchez Computer Associates, Inc., a banking software company rated 45th on the Forbes magazine list of the 200 best small companies in the U.S.

Admiral Zlatoper has served for over 10 years as the chief executive officer of large organizations in the national defense and commercial sectors. Today he is a trustee to The Estate of James Campbell, a private trust which administers real estate assets valued at more than $2 billion.
To Admiral Zlatoper, physical and spiritual development is an essential tool needed to become a successful leader.

He talks about his “management-by-walking” style as corporate head and how showing concern for employees provides motivation and inspiration that can significantly affect performance and output.

“I walked around the spaces in some area or another everyday and more or less just stick my head and ask my employees how things are going,” Admiral Zlatoper says. “After about six moths people realized that it was more than a perfunctory how are things going. It was “Well I got a little problem here” “Okay do you have all the help that you need or can we help up the other end of the building here.”

Admiral Zlatoper shares in this interview his experiences as military figure and corporate chief. He talks about the value of mentorship and putting trust to one’s peers. He shares how faith, generally speaking, contributes significantly to one’s struggle over trials and adversities.

Evan and Kari bring to listeners a great leader, and an even greater advocate of humanity.

R.J. “Zap” Zlatoper assumed his current position as the 24th Trustee of The Estate of James Campbell on the 1st of July, 2000 after successful earlier careers in the high technology industry and the United States Navy. During his service in the private and public sectors, Admiral Zlatoper has served for over 10 years as the Chief Executive Officer of large organizations in the national defense and commercial sectors.

The Estate of James Campbell is a private trust which administers real estate assets valued at more than $2 billion, with holdings that span Hawaii and 16 states on the U.S. mainland. Its largest project to date is the development of the City of Kapolei which is expected to become a major urban center rivaling today’s downtown Honolulu.

Prior to joining The Estate of James Campbell, Admiral Zlatoper served as Co-Chairman of the Board and Chief Executive Officer of Sanchez Computer Associates, Inc., a banking software company rated 45th on the Forbes magazine list of the 200 best small companies in the U.S. From 1997 through 2000, Admiral Zlatoper was instrumental in the addition of new offices, business associations, and partnerships worldwide, as well as corporate acquisitions, as Sanchez grew from a $50 million market capitalization organization to a $1 billion corporation.

Before joining Sanchez, Admiral Zlatoper completed a distinguished naval career. His final assignment was Commander in Chief of the U.S. Pacific Fleet, the world’s largest naval command encompassing half the Earth’s surface, and including more than 190 ships, 1600 aircraft, and 200,000 personnel, with an operating budget of $5 billion per year. In this command he was directly responsible for naval relations with 45 countries throughout the Asia Pacific rim. A combat experienced naval aviator with over 4,000 flying hours and 1,000 carrier landings, in addition to numerous operational assignments, he also served as: the Chief of Naval Personnel; a Battle Group Commander in Desert Storm and Desert Shield; a Carrier Air Wing Commander; the Military Assistant to the Secretary of Defense; the U.S. 7th Fleet’s Chief of Staff; an Executive Assistant on the staff of the Secretary of the Navy; and a Program Coordinator for the F/A-18 jet aircraft on the Navy staff in Washington, D.C.

Throughout his professional career, he has been called regularly to testify before the U.S. Congress. He has contributed to many Washington “think tank” studies; served as a consultant for several commercial corporations, as well as the Center for Naval Analysis; published articles on management, logistics, and naval strategy; and serves on the advisory boards and boards of directors of five corporations. He is the honorary Consul General for Slovenia in Hawaii.

Admiral Zlatoper’s academic achievements are several. He holds an Honorary Doctorate in Engineering from Rensselaer Polytechnic Institute, a Master’s degree in Management from the Massachusetts Institute of Technology, a Master’s degree in Administration from the George Washington University, and a Bachelor’s degree in Mathematics from RPI. He is a distinguished graduate of the Naval War College. Admiral Zlatoper regularly lectures on leadership, management, and military matters at universities and corporate conferences around the country and overseas.

Community involvement is very important to Admiral Zlatoper. He currently is a Trustee for Rensselaer Polytechnic Institute, a Regent for Chaminade University, and a Board of Advisors member of the School of Business & Public Management at the George Washington University. Admiral Zlatoper serves on the boards of the Pacific Aviation Museum Pearl Harbor; the East-West Center; the Vietnam Veterans Memorial Foundation; Chamber of Commerce of Hawaii – Military Affairs Council; Catholic Charities Hawaii; and is a member of the Alexis de Tocqueville Society of the United Way.

His hobbies include: reading, competing in triathlons, jogging, swimming, scuba, body boarding, and golf . . . each of which he pursues with enthusiasm, but without great distinction. A native of Cleveland, Ohio, Admiral Zlatoper and his wife, Barry (formerly Barry Lane Oliver of Virginia Beach, Virginia), have two grown children on the mainland–Ashley, a medical doctor, and Michael, an advertising executive.