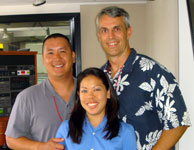 Kent Untermann – Owner of Pictures Plus

Learn how Kent turned a $5,000 football signing bonus into a $14 million annual revenue business. His business name is Pictures Plus and has 14 locations, a 42,000 sq ft manufacturing facility and 138 employees. In 1985, Kent Untermann signed a free agent contract with the Dallas Cowboys, but a leg injury killed his NFL dream. He started selling artwork at the local swap meet to make some extra money.

One of Kent’s first purchases was 1200 teddy bears that he sold at the swap meet. He then got into pictures and then framing.

So how does an ex-football player become a successful entrepreneur? Kent answers this in a way that only he can, direct. He’s a strong supporter of University of Hawaii athletics and supports numerous ”employee related” charities. Kent is building a business and making a difference.

One interesting program he is involved with is called the Sustainable Forestry Project where Pictures Plus is the first certified company involved. This is an initiative to preserve certain portions of the forest and responsible business practices.

Kent’s grandmother taught him that, “Well bought is half sold.” Find out what this means in this show.

Some questions asked:
Let’s start w/ your entry into the NFL. How long did that last?

Do you ever miss the NFL?

Why did you start selling artwork at the Aloha Stadium? Did you know that this was a good market or was it a hobby?

What kind of art did you sell at the Swap Meet?

How did you get your supplies?

What did you buy at the auctions?

How long was it from the swap meet to buying your first container of goods?

How did you find your initial supplier?

What was the next step once you found the supplier?

When did you know that you hit a niche market and you could make a successful business out of it to open a location outside of the Swap Meet?

You started off selling artwork, how did you get into framing?

So you started at the Swap Meet in 1985 and decided to open one shop in 1986, how many locations do you have currently?

And you have two more locations opening in the Big Island?

Where does your framing get done?

Where do your frames come from?

How did you make contact with your frame manufactures initially?

Pictures Plus is known for it’s koa veneer frames, why?

Pictures Plus tries to stay competitive on the market with it’s prices 40% less than mainland prices, do you have many mainland customers that come to Hawaii and bring their pictures and art to be framed by Pictures Plus and have it shipped back?

Why not offshore production?

Do you plan on expanding to the mainland?

How did you get your entrepreneurial start?

What non profits or community based organizations are you involved with?

How has that affected your business success?

Did you eventually get financing? How?

What was your most challenging business experience and how did you overcome it?

What are the biggest and most common mistakes you see entrepreneurs or business owners make when starting a new venture?

Is your wife involved w/ Pictures Plus?

How do you work together to gain the best results? Did you always agree on business ideas?

BIO:
Kent Untermann was recruited out of the San Francisco Bay Area (Fairfax and San Rafael) to play quarterback for the University of Hawaii under former head coach Dick Tomey back in 1980. After a position change, he lettered at tight end for UH from 1981-84 and was named to the Warrior Club in his junior and senior seasons. Kent went on to sign a free agent contract with the Dallas Cowboys in 1985, but a leg injury cut short his NFL career.

Today he is the successful business owner and founder of Pictures Plus, (www.picturesplus.com) in Honolulu. His business had a humble beginning back in 1985 with Kent and his wife Lori selling artwork on weekends at the Aloha Stadium Swap Meet. He opened his first store location in 1986. He and his wife have grown the business from the swap meet and his $5,000 signing bonus from the Cowboys into a $14 million annual revenue business. Pictures Plus now has 12 locations statewide, with two more locations to open on the Big Island by end of the year. The company operates from a 42,000 Square Foot manufacturing facility based out of Kapolei to support all framing retail locations.

In 1997 the U.S. Small Business Administration (SBA) voted Kent Hawaii’s Small Business Exporter of the Year. Last year the company was recognized in Atlanta Georgia with capturing two of seven national awards in the framing industry, and in Décor Magazine as being in the top 100 art & framing retailers in the nation.

Pictures Plus is one of Hawaii’s fastest growing corporations. From the very beginning, Pictures Plus has approached the art and framing business with an outsider’s perspective and a passion for excellence.

Pictures Plus purchases most of its supplies by the container, direct from the manufacturer. This enables the company to pass significant savings on to their customers in Hawaii and on their website. By keeping a close eye on the competition, they make sure that prices are at least 40% less than average mainland prices, offering unparalleled value to its customers.

Pictures Plus manufactures all of the frames they sell, including a wide variety of ready made frames. They are known for beautiful Koa Wood veneer frames crafted from hand selected Koa wood from a company owned farm on the Big Island of Hawaii.

This success story told by a former UH and aspiring Dallas Cowboys football player, who fell injured during preseason, provides commonality with young aspiring UH athletes along with the drive to succeed.