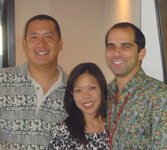 Josh Feldman joined his family business at a time when the company needed a serious makeover. Mentored by his father, Josh grew sales over 500% in three years and spearheaded the mainland expansion. Today, Tori Richard is the premier resort wear provider in Hawaii.

Josh has given back to the community in a traditional manner. Due to his restrained time allowance, Tori Richard has donated close to one million dollars to charities.

Some questions asked:
Josh, welcome to our show. Most of us in Hawaii are familiar with the name Tori Richard for it’s classy resort wear. This is a family business correct? When did you join the company? What is your current position and role?

What was the most challenging thing about getting started with the family business and how did you overcome it?

How did you prove yourself?

How was it working with family?

Are any of your other family members involved in the business?

Why aren’t your other siblings working with the business?

Did you always plan on working with the family business?

What are the 3 most important things you learned from working w/ your father?

When you joined the company what were your goals?

In 1994 you updated the line and reduced operating costs, how were you able to do that?

You also became a leader in mainland sales, how were you able to increase your sales revenue by 500% in three years?

You absolutely modernized the Tori Richard product, look and brand. What was your strategy when doing so?

What are the biggest and most common mistakes you see business owners make managing their business?

What are the most important laws to becoming successful?

How do you manage your time between business and family, especially with travel?

Does your wife work in the business also? Why or why not?

What is the most important thing to teach your children? Are you preparing them to take over the business later?

How do you make time to give back to the community?

What are the biggest mistakes people make?

What’s your view on partnerships?

Tori Richard’s started off as a women’s resort wear company and a couple decades later, when you joined the company, expanded to a men’s collection. Do you see the company adding a children’s collection for family sets?

Tori Richard, Ltd. Is also the current licensee for Harley-Davidson Motor Company, what are your plans with this?

BIO:
Joshua Feldman is the President and CEO of Tori Richard, Ltd. a Hawaii based fine clothing manufacturer. He was born & raised fro most of his life in Hawaii. He is married with one child. Josh’s first job was as a newspaper delivery boy in Auckland, New Zealand.

Born in Boston, Massachusetts, Mort Feldman moved to Chicago after World War II and started a successful coat manufacturing business. One cold and windy winter in 1954 Feldman decided to sell his business and retire to Hawaii.

After just one year in Hawaii, and together with pattern maker Mitsue Aka and designer Janice Moody, Feldman started a new business in 1956. The company was named after one of Feldman’s three sons, Richard, and Moody’s daughter Victoria. Tori Richard, LTD. was born with the singular goal of injecting sophistication into women’s resort wear.

The first factory was on Pier 7 in downtown Honolulu. At high tide it was not unusual to see wet floorboards. As the business quickly grew, Feldman moved the factory to a quonset hut on Beretania street. It was there he hired Tori Richard’s first employee, Mrs Chiyoko Ige, who still works in the company sample department.

As Feldman’s goal of creating a sophisticated high end women’s resort line was achieved, by 1968 Tori Richard had nearly 200 employees with dedicated showroom offices in Dallas, Chicago, Los Angeles, and New York. Tori Richard women’s sportswear could be found in Saks Fifth Avenue, I. Magnin, Neiman Marcus, Lord & Taylor, Marshall Fields, and many others. The company archives are full of ads from the 1960s in Vogue Magazine, Harpers Bazaar, The New York Times, and many others.

It was not until the early 1970s that Feldman decided to take the men’s business seriously. Using the prints he developed for the women’s line, the early Tori Richard men’s shirts quickly became a staple part any island gentleman’s wardrobe.

Mort Feldman once again retired from the business in 1983 to live in New Zealand for several years. This time his retirement lasted just over a decade. During that time Tori Richard made a complete transformation from being a women’s sportswear company with a global market to a manufacturer of primarily men’s aloha shirts and uniforms for the Hawaii market.

In 1994, together with his youngest son Josh, Feldman returned to Tori Richard with the objective of reestablishing the company’s legacy in resort sportswear, this time for both men and women. Feldman senior passed away in 2004. Today the company has regained it’s position in the marketplace that it has historically held. Tori Richard sportswear can be found in many of the same better specialty stores and better department stores across the country that have carried the line for decades. In addition, the company now has a division devoted to uniforms, and another to licensing.

In 2003 the first of four company-owned retail stores opened with the most recent, at Ala Moana center, opened in November 2004.