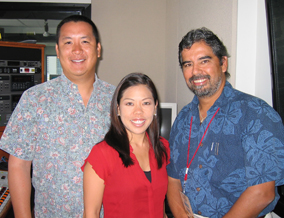 Henk Rogers just sold his 3 ½ year old company, Blue Lava Wireless to Jamdat (NASDAQ: JMDT) for approximately $137 million in April 2005. Although this may seem like an overnight success, Henk’s business journey began twenty years ago when he moved to Japan. His life is very similar to the role playing games he invents and has taken him to Russia for a negotiation with the Soviet Government over the video game, Tetris. This story involves the KGB, billionaires as competitors and just pure Chutzpah. Tetris is now the most universally played computer game of all time.

Henk shared with us about how it took a dozen or so companies for him to become ‘lucky’. Luck is opportunity meeting preparedness and Henk was absolutely prepared and thus created his own luck. He takes us through a step by step account of his business development and personal philosophy. He talks about Hawaii’s ACT 221/215 and how that made it possible for him to launch Blue Lava Wireless in Hawaii.

Henk is absolutely committed to the people and state of Hawaii. He could easily have located his company elsewhere. So why did he insist that when Jamdat bought him out they allow the company to remain in Hawaii? After you hear this interview, you’ll know why.

Some questions asked:
Can you tell us a bit about how you got into video game industry?

Please tell us more about Blue Lava Wireless and Jamdat and what they do?

Can you talk a bit about what how you sold your company for $137 million?

How has the Manoa Innovation Center helped your business?

What are you doing that made your company the most profitable in its area?

Can you tell us the Tetris story and how you acquired the rights?

What are the 3 biggest mistakes people make when starting their own business and what do you suggest for them to overcome these mistakes?

Are entrepreneurs made or born?

Were you always an entrepreneur?

How many companies have you started?

How did you move into a business from your job?

Who was your mentor(s)?

Are you teaching your kids to be entrepreneurs?

How did you obtain financing?

How did you develop your business skills?

BIO:
Considered one of the visionaries of computer games, the world’s fastest growing entertainment industry today, Henk Rogers helped change the face of the industry as the entrepreneur responsible for bringing Tetris, one of its greatest games, to the U.S and world market.

Working in Japan’s fledgling computer game industry in 1989, Henk traveled to Moscow, still under Communist rule, befriended Tetris creator Alexey Pajitnov, and won the rights to the game in a battle of wills against a well-established European publisher and the KGB. Recently passing the 70 million units sold mark, Tetris is the world’s most popular computer game. Blue Planet Software currently holds the exclusive intellectual property management rights to Tetris.

A rare breed of businessman and gamer, Henk is also no stranger to the creative side of the industry. Combining his training in computer science and his personal “passion for the game,” he helped transform the way games were played in Japan in 1983 by designing and developing Black Onyx, the country’s first-ever Role Playing Game. Hailed as “the father of RPG” in Japan, Henk helped boost Japan’s preeminence today in these sophisticated computer games that allow players to be “in” the game they are playing.

The Holland-born Henk comes by his global vision of computer gaming naturally. He learned English at the age of 11, when his family moved to New York City, where he attended from Manhattan’s prestigious math and science school, Stuyvesant High School. Henk then journeyed to the University of Hawaii to study computer science, while continuing his love for board games, notably Go and Dungeons and Dragons.

Working in Japan during the early years of its gaming industry, Henk used his multilingual skills as the only foreigner skilled in sales, production and technology to form Bullet-Proof Software to publish his revolutionary Black Onyx RPG.

With the emergence of the next-generation of hand-held game systems, Henk helped bring together one of the gaming industry’s greatest marriages – Tetris and Nintendo’s Game Boy. Henk negotiated for Nintendo both the handheld and console rights to Tetris, which has helped sell more than 35 million units of Tetris on Nintendo’s Game Boy, nearly half to women.

In 1990, with the help of Tetris author Pajitnov, Henk established AnimaTek in the U.S., a computer graphic technology company that pioneered such ground-breaking technologies as automatic animation of virtual characters and computer-generated procedural landscape and vegetation.

In 1996, when Tetris rights reverted back to Pajitnov, Henk returned to the U.S. from Japan and settled in Hawaii, where he formed Blue Planet Software to manage the intellectual property rights for Tetris. Under Blue Planet’s stewardship, Tetris continues to successfully evolve, while maintaining its basic integrity, to ensure that it will remain one of the world’s best selling computer games.

In 2002, Henk took the next big leap into mobile phone computer game development and publishing by forming Blue Lava Wireless, which has become one of the top mobile phone game publishers in the U.S.