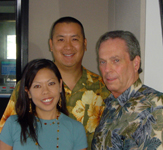 Barry Weinman merged and then took his first company public, making his first 9 employees millionaires (including the receptionist) in the 1970’s. He then became a venture capitalist and he and his partners have helped 70 companies become public companies. Some companies included are Palm, 3Com and Medscape.

Barry later founded the Barry and Virginia Weinman Foundation that established the Pacific Asian Center for Entrepreneurship at the College of Business in the University of Hawaii. The foundation is dedicated to social causes and education.

Some questions asked:
Welcome to Greater Good Radio Hawaii Barry. You are a venture capitalist can you tell us in your words what you do?

How did you get started?

What are your rules of engagement?

What’s the process for an entrepreneur pitch to you?

How do you judge a business plan and executive/business summary?

What types of businesses do you invest in?

What are you looking for in a business?

Was there a tipping point or breakthrough moment in your career that you remember?

Where did you learn the value of a successful entrepreneur and being a community activist?

Did you always think that way or did someone “enlighten” you to this way of thinking?

What’s your philosophy on whether or not business people should give back to the community?

What do you say to those people who say there just isn’t enough time to get involved with the community because they need to focus on their careers first and primary?

Could you tell us a little bit more about the Wienman Foundation and how it works together with the University of Hawaii?

What’s involved in setting up a foundation like this?

Can you share with us what your first venture was and the outcome?

You work with your wife, how has it been working with her?

What did you learn from your first IPO?

How did you team up with Hewlett Packard? Who engaged working together?

How did you come up with the philosophy of sharing the company’s equity with your employees?

What are the original 9 employees doing today?

What are the most important laws to becoming successful?

What is the most important thing to teach your children?

Do you have any stories you can share about a tough time yet you still had hope and belief that with patience you will make it?

What are the biggest mistakes people make?

How do you know when to change gears?

What are the reasons you decided to come on this show?

Can you tell us why other people should come on this show?

Can you tell us why people should listen to this show?

Since 1980, Barry and his partners have helped take over 70 private companies public. He has served on the Board of Directors of numerous
high tech public and private companies. Barry holds a B.S. from
Clarkson College of Technology, and an M.A. from the London School of Economics / University of Southern California. The London School of Economics finds the Hawaii Gas Cap Law quite amusing.

In mid 2005 he co-founded DragonBridge Capital in Honolulu, Beijing and Shanghai. DragonBridge is a Merchant Bank focused on assisting Chinese technology companies to enter US capital markets by establishing their US headquarters in Hawaii. This strategy is a public / private partnership between DBEDT/HTDC and DragonBridge and we share China offices and work together to encourage Chinese tech companies to partner with Hawaii companies.

Prior to becoming a venture capitalist, Barry held management positions with AT&T, IBM, and Fairchild Semiconductor. He co-founded Interactive Applications Inc., the first on-line manufacturing software and services company, merged it with Boole & Babbage which went on to have an Initial Public Offering

During his time in the US Navy, LT Weinman served on the USS Radford
(DD446) at Pearl Harbor and was the speech writer and intelligence briefing officer for the US Ambassador to London and John McCain (Senator McCain’s father) who was the Commander of US Naval Forces in Europe prior to becoming CINCPAC in Hawaii. From 1988 to 1995 he taught
in the Entrepreneurial Program at the USC Business School. Barry is a
UH Foundation Trustee, Chairman of the Investment Committee, and serves on the Board of Hoana Medical.

Together with his wife Virginia, they created the Weinman Foundation which supports a number of Hawaii and California Charities. This foundation established the Weinman Chair of Entrepreneurism, (held by Rob Robinson), and the Pacific Center for Entrepreurship at the College of Business at UH.