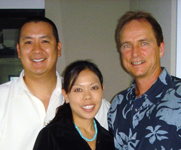 One thing that’s giving me a warm and fuzzy feeling is how much potential there is in Hawaii-based companies and entrepreneurs. We spoke with Dr. Patrick Sullivan, founder of Oceanit and President and CEO of Hoana Medical.

Sullivan got an early start in entrepreneurship out of necessity. With five kids in his family, Sullivan paid his way through college by starting and running a landscaping business.

After completing his PhD, Sullivan founded Oceanit which is a self funded tech incubator creating technologies that really make a difference. Once they create breakthrough, marketable technologies; Oceanit spins out the technology into a separate company. This is how Hoana Medical was born in 2002, and Nanopoint in 2005.

Hoana Medical has a product very similar to what was seen in the ‘Star Trek’ sick bay. The device called Hoana LG1 can monitor a patient’s vitals without cuffs, attachments or probing the patient. In test situations Hoana LG1 has already saved lives.

The LG1 is less than 30 days from FDA approval and Hoana is preparing for an IPO in the very near future.

Oceanit and Hoana have contributed to the community by training over 300 interns and supporting numerous Hawaii organizations.

Dr. Sullivan’s company truly does ‘dual use’ right. By using the right mix of government research and development with the right consumer market, Oceanit creates a compelling future for the technology industry in Hawaii. Hear how Dr. Sullivan developed his entrepreneurial skills at an early age and how he turned that into one of Hawaii’s most successful and recognized technology companies.

Dr. Patrick Sullivan is the Founder and Chairman of Oceanit – one of Hawaii’s largest and most diversified science and engineering companies. After receiving his Ph.D. in Engineering, he founded Oceanit in 1985, and quickly grew it into a technology incubator focusing on (1) Aerospace, (2) information technology, (3) life sciences, and (4) engineering consulting. Oceanit employs approximately 100 engineers and scientists, from civil to aerospace engineers, from biologists to physicists, who work in cross-collaborating teams to create a broad range of hybrid solutions. Solutions include the design of a $40 million desalination facility for the city of Honolulu, the modeling and prediction of space debris for NASA, a $50 million high accuracy orbital positioning technology for the Air Force, and breakthrough imaging technology to observe gene and protein expression in live human cells. Currently, Dr. Sullivan is the President and CEO of Hoana Medical, one of Hawaii’s most promising and exciting startups. Based on patented technology developed at Oceanit for Army medevac helicopters, Hoana Medical has raised over $17 million dollars from investors to commercialize a transparent physiological monitoring technology.

Dr. Sullivan has over 21 years of business management and leadership experience. He has written on numerous engineering and scientific topics, and served for several years as an Adjunct Professor with the Department of Ocean Engineering, University of Hawaii at Manoa. During his tenure as the Vice-Chairperson of Hawaii’s High Technology Development Corporation (HTDC), Dr. Sullivan was instrumental in the creation of several high technology programs in the State of Hawaii, including Defense Center of Excellence for Research in Ocean Sciences (CEROS) and Hawaii’s National Electric Vehicle Demonstration Program. Dr. Sullivan completed a term appointed by the U.S. Secretary of the Navy to the Ocean Research Advisory Panel (ORAP) of the U.S. National Ocean Partnership Act of 1997, which coordinated oceanographic research from all Federal agencies. Dr. Sullivan also served on the University of Hawaii Connections board, which fosters technology-based economic development through university-business interactions. Dr. Sullivan continues to be active on various boards, and is the Honorary Consul to the Republic of Indonesia for Hawaii.