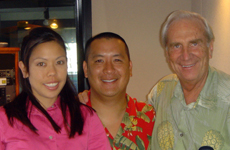 Don Soderquist, retired Chief Operating Officer and Senior Vice Chairman of Wal-Mart, Inc. was instrumental in growing Wal-Mart from $1 Billion to $200 Billion becoming the largest company in the world.

In a twist where the master becomes the student Soderquist shares how he met Sam Walton. Walton was a franchisee of Ben Franklin Stores and Soderquist was the President and CEO. Walton left Ben Franklin to start Wal-Mart, but they kept in touch. Walton continuously asked for Soderquist to join the Walmart team and once Wal-Mart achieved $1 Billion in sales, Soderquist finally left Ben Franklin to work for Walton and later retired as the second in command.

Soderquist focused intensely on maintaining company culture. He had a microphone on his desk that
allowed him to communicate
directly with the Wal-Mart staff. Every Saturday, he would choose a manager to speak on the Wal-Mart culture in their own words to the entire company.

Their foundation for company culture is based on ethics and biblical principles. Soderquist is first to admit that Wal-Mart has made a lot of mistakes during the years, however, during his tenure he never was asked to go against his values. This led him to start the Soderquist Center for Leadership and Ethics. A center available worldwide that trains executives on the benefits of true ethical leadership.

Some questions asked:
Welcome Don. Well, what was it like to work w/ Walmart during a period of such massive growth?

What is your role in the company as Senior Vice Chairman and Chief Operating Officer?

Why did you move from Ben Franklin?

How did Sam Walton recruit you?

You’re known as the “Keeper of the Culture” what does that phrase mean to you?

What did you do to “Keep the Culture?”

Tell us 2 to 3 things that you learned from Sam Walton.

What are some lessons that business people can learn from Walmart?

What are some thins that people need to ask and find out when applying for a job.

Why do you think companies fail?

Who has been your mentor(s) that helped you make you who you are today.

You talk about ‘faith’ in your books. What does ‘faith’ have to do with business?

What are your thoughts about running a successful business and supporting the community?

What have been some of the early struggles for you at WalMart Corporation?

What are you most proud of during your time at Walmart? What are some of the successes?

Could you tell us about the Soderquist Center for Leadership and Ethics?

What was the inspiration to creating this center?

What is the goal or mission of the Soderquist Center?

What are the biggest challenges business or personal?

What are the top five ethical values you think children need to learn from their parents?

What would you do if you were asked to help a company?

BIO:
Don Soderquist joined Wal-Mart Stores, Inc., in 1980 where he served as executive vice president, vice chairman and chief operating officer, and finally senior vice chairman. Don received his B.A. degree in Business Administration from Wheaton College in Illinois. In 1996 Don was inducted into the Retailing Hall of Fame, and in 1998, John Brown University created the Soderquist Center for Business Leadership and Ethics in his honor.

Links:
The Soderquist Center for Leadership and Ethics
Walmart