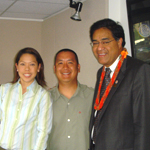 Mufi Hannemann – Mayor of the City and County of Honolulu, Hawaii

Mayor Mufi Hanneman runs a billion dollar institution with 10,000 employees. His customers comprise three-fourths of Hawaii’s population which owns more than half of the state’s taxable assets. His office is the city and county of Honolulu.

Listen to this exclusive Greater Good Radio interview with Mayor Mufi Hanneman as he talks about his mission and vision for the state capital, particularly the revitalization of Chinatown to recognize the city’s rich Chinese and Southeast Asian heritage.

“I want to continue to emphasize the Chinese cultural heritage,” Mr. Hanneman said. “Not only the Chinese that have been here for a long time, but recognizing the Southeast Asian group of Chinese that are moving here in great numbers.”

He also shares with us his involvement, during the start of his political career, in the White House Fellows programs, which gives young Americans an opportunity to work in the nation’s capital, plus, his purpose for putting together Pacific Century Fellows program focusing on building tomorrow’s leaders.

Find out more about Mayor Mufi Hanneman as he talks about his decision to run for public office and be of service to the community, having given up a prospectively lucrative career in sports. He even shares some impressions of famous people and leaves us with a song. This is the most different interview you will ever hear the Mayor in.

City Hall is only a short trip from the working-class neighborhood of Kalihi where he grew up. But for Mufi Hannemann, the twelfth Mayor of the City and County of Honolulu, it has been a journey that has led him to careers spanning business and government, taken him to places far from home, and is now presenting him an opportunity to fulfill a long-held dream of serving Hawaii and her people.

He was born Muliufi Francis Hannemann in Honolulu on July 16, 1954, the sixth of seven children of Samoan immigrants Gustav and Faiaso Hannemann. Mother cared for the children, while father worked at several jobs to support the family. Theirs was a spiritual and loving home where each day began and ended with prayer.

He attended Fern Elementary School before being accepted to Iolani School. Always a top student, Hannemann’s physical stature also gave him a prominent place in sports. The 6-foot, 7-inch scholar-athlete would earn not only all-star honors for his basketball and football prowess, but lead the school as student body president. It was in high school that he was nicknamed “Mufi” by a local sportswriter, and it’s a name he’s kept ever since.

Hannemann returned home to join the faculty and coach the varsity basketball team at alma mater Iolani. In 1979, he was tapped by Governor George Ariyoshi to be a special assistant on Pacific affairs. The governor’s office would serve as a launching pad for Hannemann’s career in government, business, and politics. In the summer of 1980, he was picked to be a special assistant in the U.S. Department of the Interior during the Carter administration. Hannemann later returned to the State Capitol, and in 1983 would be named a White House Fellow through a nationwide competition, have the privilege of serving with then-Vice President George Bush in the Reagan White House, and traveling the world over.

Hannemann joined C. Brewer and Company following the conclusion of his fellowship, was the Democratic nominee for U.S. Congress in 1986, and later rejoined Brewer as vice president for marketing, corporate development, and public affairs.

In 1991, Governor John Waihee appointed Hannemann to be the director of the Office of International Relations, and little more than one year later, director of the Department of Business, Economic Development & Tourism. He resigned his cabinet post to run for the Honolulu City Council in 1994 and represented the Aiea-Pearl City-Waipahu district for one term. He was re-elected in an uncontested race in 1998 and later served as Council chairman during part of his tenure at City Hall.

Hannemann has the distinction of having served in four U.S. Presidential administrations. He is presently serving as a public sector member of the Advisory Committee on Apprenticeship under U.S. Secretary of Labor Elaine Chao. He was previously on President Bush’s Council on the 21st Century Workforce, also under Labor Secretary Chao. He was the U.S. Representative to the South Pacific Commission during the Clinton administration.

He is the founder of the Pacific Century Fellows, modeled after the White House program, and volunteers with the Iolani School board of governors and various non-profit organizations. He has donated numerous scholarships and awards to high school students over the years.

Hannemann is married to Gail Akiko Mukaihata. She was born and raised in California and is a UCLA alumna. They met during Hannemann’s first job in Washington, D.C., while she was a professional staff member on Capitol Hill. They live in Aiea.

He is the first person of Samoan descent and the first member of the Church of Jesus Christ of Latter-day Saints to serve as Mayor of Honolulu. He is married to Gail Mukaihata Hannemann, a Japanese American.

Education
Hannemann was raised in the Honolulu community of Kalihi by his German father Gustav Hannemann, and Samoan mother Faiaso Hannemann. He attended various local public elementary schools before being accepted to the prestigious Iolani School with a scholarship. He graduated with honors and became one of the school’s most memorable athletes in basketball and football. Hannemann briefly left the Hawaiian Islands to attend Harvard University. In addition to graduating from Harvard cum laude, he was elected freshman class president and was varsity basketball letterman. Upon leaving Harvard, Hannemann became a Fulbright Scholar and continued his studies at Victoria University of Wellington in New Zealand.

Government Service
Hannemann’s mayoral campaign against Duke Bainum in 2004 was considered one of the fiercest races in the city’s history and the most expensive.

Hannemann returned to Honolulu after his studies to become an educator at his alma mater, Iolani School. He was a history teacher and popular basketball coach. After his teaching career, he entered government service as a special assistant to President Jimmy Carter, working with the United States Department of the Interior. Hannemann was recalled to Honolulu to become special assistant to Governor of Hawaii George R. Ariyoshi before returning to the White House to serve as staff assistant to Vice President George H. W. Bush.

After a brief stint as President and General Manager of Punaluu Sweetbread Shop and C. Brewer Hawaiian Juices, in 1984 Hannemann was promoted Vice President for Corporate Marketing and Public Affairs for the parent company, C. Brewer and Company, Ltd.

In 1986 Hannemann ran for the First District U.S. House seat vacated by Cecil Heftel, who sought the governorship that year. Hannemann won the Democratic primary election but lost the special election to fill Heftel’s unexpired term to Neil Abercrombie. He again lost in the general election to Republican candidate Pat Saiki. In 1990, he ran for Congress again, this time for the Second District seat vacated by Daniel Akaka, who was eventually elected to the U.S. Senate. He lost the Democratic primary to Patsy Mink, who eventually won the seat.

However, Hannemann would again be tapped for government service in 1991, appointed by Governor John D. Waihee III as Chairman of the Hawaii Pro Bowl Host Committee, Chairman of the Task Force on Homeporting, Director of the Hawaii Office of International Relations and Director of the Hawaii Department of Business, Economic Development and Tourism. Having directed various state agencies of the Government of Hawaii, Hannemann was appointed by President Bill Clinton to serve at the federal level once again as United States Representative to the South Pacific Commission.

In 1994, Hannemann was elected to the Honolulu City Council representing Aiea and Pearl City, and re-elected to his seat in 1998. He served as Council Chairman from 1998 to 1999. Differences in opinion with then-Mayor Jeremy Harris led to his resignation from the Council in 2000 to run against Harris. Harris won re-election in the September 2000 non-partisan election with enough votes to avoid a run-off that November.

In the administration of President George W. Bush, Hannemann served in the United States Department of Labor as a member of the President’s Council on the 21st Century Workforce.

In 2004 Hannemann again ran for Mayor, this time to replace Harris, who was barred from seeking a third full term as Mayor. His opponent was former City Council colleague Duke Bainum. The race was considered one of the most expensive and fiercest races, with both candidates sharply criticizing the other’s stands and character. Bainum received the most votes in the September election, but failed to receive the necessary majority to avoid a run-off against Hannemann. In November, Hannemann narrowly won the election with a margin of about 1,300 votes out of nearly 300,000 cast.

Hannemann was sworn in as mayor on January 2, 2005. In his first State of the City address, Hannemann pledged to concentrate on fiscal restraint and basic city services, drawing a contrast between himself and his predecessor. He has been widely praised for his open and inclusive style of governance.

Mufi Hannemann is the 12th mayor of the City and County of Honolulu, the 13th largest city in the United States. He took office on January 2, 2005, following an illustrious career in business, government, and politics.