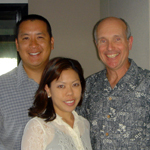 Seldom do you come across a man who has pulled out five multi-million dollar banks from the doldrums.

Aptly nicknamed ‘bank turn-around specialist’ John Dean started his career in the banking industry where he has virtually ‘rescued’ the Silicon Valley Bank and the First National Bank of Oklahoma amongst a few others.

He has gathered knowledge and experience in the business to become an effective financial advisor to CEOs and start-up companies.

Mr. Dean shares his story on the importance of cooperation and teamwork in facing difficulties.

“I think great companies come not from an individual but greatness overtime comes from a team,” he said. “And to build a team one path to doing that, doing it well is getting that team and all your employees committed to giving back into the community.”

John Dean has established a foundation in his family name along with an organization called the Entrepreneur’s Foundation of Hawaii, which enables companies to integrate community involvement and philanthropy into their corporate culture.

Listen to this interview and find out more about his success as a banker and his hopes as a venture capitalist with Startup Capital Ventures and Tuputele Ventures.

BIO:
John C. Dean
A graduate of Holy Cross College, a former Peace Corps Volunteer in Western Samoa, and a graduate of the Wharton School with an MBA in Finance, John spent 30 years as an executive in the financial services industry, focusing for the last 10 years on technology startup companies. He is presently Managing Director of a small private equity fund, Tuputele Ventures Fund, investing in fund-of-funds, venture capital funds and startup technology firms with investments primarily focused in Silicon Valley and Hawai`i. He is also the managing general partner of Startup Capital Ventures.

John is an advisor to and director of various venture capital firms and technology companies both in the United States and overseas. He also serves as director of several non-profit organizations and frequently speaks on topics related to leadership and building successful companies.

John is on the advisory board of the Wharton School of the University of Pennsylvania, as well as a committee member for the School’s five-year capital campaign. He is a director of Pacific Asian Center for Entrepreneurship and E-Business (PACE) at the business school of the University of Hawai`i. And, he is a director of the Oceanic Institute, an affiliate of Hawai`i Pacific University.

John also has many years of experience investing in technology companies. He has served as Managing Director of Tuputele Ventures Fund, LLC, a small private equity fund investing in early-stage technology companies and venture capital funds. He is an investment director for various venture capital firms, both in the U.S. and overseas, including Advanced Technology Ventures (ATV), Authosis Capital, Institutional Venture Fund (IVP), Leapfrog Ventures, and Walden International. Also, John is a director of various technology companies, including AssistGuide, BioImagene, EzRez Software, H-5 Technologies, PayDay One, and Winery Exchange. He brings a wide network of industry contacts to the Fund, notably in Silicon Valley and Hawaii.

John was a founding director of the Entrepreneurs Foundation in Silicon Valley and for a six-month period during 2001-2002, was its interim CEO. John is also a director of HiBEAM, a nonprofit organization that serves as an accelerator for startup companies in Hawai`i, and Chairman of the Emmett R. Quady Foundation, his family foundation.