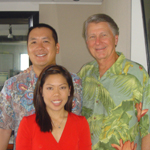 After college, Larry Johnson worked as a bank teller for $500 a month. Eventually, Johnson was appointed to branch manager in Waikiki as a 27-year old. He would then gradually make his way up the corporate ladder to become chairman of the board and CEO of the Bank of Hawaii.

Larry Johnson has a long-standing relationship with the company and his introduction to the banking industry took quite a funny twist. As a high school student in 1958, Johnson—a baseball player—along with his four friends, was asked to join the Bank of Hawaii for a summer job. Little did they know that they were to play for the company’s softball team.

Eventually Johnson was taken on board the bank’s management trainee program, where he was acquainted to the various logistical operations of the financial institution. This was the bona fide start of his career in the industry.

Now retired, Johnson is a huge supporter of the small business industry in the state. He is an active investor on local startups including Hoku Scientific. Johnson says, “I felt it was really good for the economy of Hawaii and I’d like to see small startup companies succeed here.”

Find out more about Larry Johnson as he talks about the current state of the Hawaii economy and why he views the islands as full of opportunities offering wonderful prospects for the future.

More is in store so click on and listen.

Lawrence M. Johnson is the Past Chairman of the Board of Directors and Chief Executive Officer of Bank of Hawaii. He retired from his position on November 3, 2000.

Mr. Johnson took office as Chairman and CEO of Bank of Hawaii on August 1, 1994. Prior to his election to this position, he held the office of President since 1989; Vice Chairman since 1984; and Executive Vice President since 1980. He was also an officer and director of the company’s subsidiaries.

Mr. Johnson joined Bank of Hawaii as a summer trainee in 1958 and was accepted into the management trainee program in 1963. His career in the organization spanned many areas, with emphasis in consumer banking, marketing and sales.

Active in the community, Mr. Johnson serves on the boards of The Hawaii Tourism Authority, Hawaii Pacific University, The Hawaii Community Foundation, and The Nature Conservancy of Hawaii.

A former chairman of the Hawaii Business Roundtable, Mr. Johnson was also
conference chairman of the Pacific Basin Economic Council 2000 International General
Meeting, chairman of the Aloha United Way’s 1992 Campaign, chairman of the board of the Hawaii Visitors Bureau and the Hawaii Heart Association; and president of the Waikiki Improvement Association. He has served on the board of directors of the Aloha Council – Boy Scouts of America, Aloha United Way, Better Business Bureau, Bishop Museum, Blood Bank of Hawaii, East-West Center, Chamber of Commerce of Hawaii, The Dole Food Company, The Contemporary Museum, Hawaii Convention Park Council, Hawaii Visitors Bureau, The Japan-America Society of Hawaii, Institute for Human Services, Lanakila Rehabilitation Center and Straub Foundation, Hawaii Preparatory Academy and on the Advisory Board of Kamehameha Schools. As appointed by President Clinton in April, 1996, he served on the Commission on United States-Pacific Trade and Investment Policy.

He has received a number of awards honoring his leadership, professional accomplishments and community service, including the University of Hawaii “Distinguished Alumni” in 1993, the 1994 “Fellow of the Pacific Award” presented by Hawaii Pacific University in 1997. He was named as an inductee to the Pacific Coast Banking School Hall of Fame in 1998.