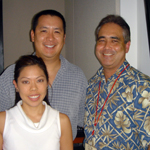 Mike McCartney is a real all-rounder. He has served in the Hawaii State Senate for 10 years and co-produced Hawaii’s number one local TV show “Hawaii Stars”.

McCartney worked as a negotiation specialist for Hawaii State Teacher’s Association for his foremost job. And he has been the incumbent president and CEO of PBS Hawaii since 2000.

But despite all success, he was just an average kid—and his adolescent disposition should serve as an example to high school and college students who are finding it hard to put direction in to their future. McCartney himself was a C-student back in high school and his GPA made it doubly hard for him to find a suitable university. But his perseverance and dedication eventually paved the way for him to see clearly what he really wanted to do with his life.

Greater Good Radio talks to Mike McCartney about his career and how he made it as big boss of PBS Hawaii. McCartney also shares a line from his dad’s poem which he personally lives by, “The cosmic dust that you borrowed from the universe, give it back in brighter coin than you received.”

With this mantra in mind, it seems that everything that McCartney does is veered towards being of service after having received loads from the community.

His advice to the public especially students, “Come up with something that you enjoy doing that you think can help the community.”

Prior to joining PBS Hawaii as its president and chief executive officer in November 2000, Mike McCartney served as a state senator in the Hawaii State Legislature (1988 to 1998). He held several key leadership roles in the Senate’s majority. He also served as a cabinet member under Governor Benjamin Cayetano (1999 and 2000) as the director of the state Department of Human Resources Development. He worked as an independent producer on several local productions for television but was instrumental in creating and producing “Hawaii Stars,” a local television program that, in many ways, was the forerunner to the current national program “American Idol.”

Over as many years, McCartney continued to serve the community by serving on various community boards including: past chairman of the Hawaii Tourism Authority; current board member for the Hawaii Justice Foundation; board member for the Royal State Trust; board member for the Center for Alternative Dispute Resolution; and former board member of Pacific Resources in Education and Learning. He has also been the recipient of numerous awards and honors including Freshman Legislator of the Year (1989) from the University of Hawaii Professional Assembly, Client Advocate Award from the United Cerebral Palsy Association of Hawaii (1991) and Lawmaker of the Year from Small Business Hawaii (1993).

A lifelong resident of Hawaii, McCartney is married to Dr. Candace Furubayashi and is the father of two sons and a daughter.

Fellowship Program (1993) – Selected by French Government for two weeks training and orientation in France for potential and future young leaders on foreign and domestic policies.

Stanford Graduate School of Business, Executive Program for Nonprofit Leaders-Arts (June-July 2003). One of four nonprofit leaders in the state of Hawaii nominated by the Hawaii Community Foundation.