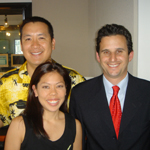 Brian Schatz’s community involvement is spread too far but not too thin. His public service targets all walks of life, from disadvantaged youth to ailing senior citizens; and different sectors, from education to the environment—all this made possible by the myriad of programs that his $6 million organization, Helping Hands, implements annually.

Schatz considers his political involvement as an extension of his public service and not-for-profit commitment. He had begun his non-profit work through the Youth for Environmental Service years prior to joining politics as a member of the House of Representatives in 1998.

Politician and philanthropist, Brian Schatz, is put to the fore as he shares with Evan and Kari his experiences as a public servant, his thoughts on politics, and why he commits himself to helping the elderly.

Schatz talks about the difficulties he faces in trying to uplift the lives of our senior citizens. He says, “This is the most difficult thing to raise money for and to raise awareness of because it is just not the same, for instance, school supplies for kids; it’s not that warm and fuzzy thing.”

“It’s difficult to get corporate sponsorship even community foundation sponsorships for taking care of adults with severe and persistent mental illness. These are the sickest people in our State mentally, and I think it is a measure of our society how we take care of our people like that,” he added.

Listen now as Greater Good Radio brings 50-minutes of Brian Schatz. This is a good-listen for our young leaders and those who have dedicated their lives in advancing the State of Hawaii.