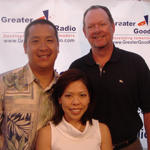 It may sound ironic but being a college drop-out proved to be Dennis Francis’ ticket to success. At the age of 20, Dennis began his career in the entry-level management position for a local daily newspaper. Favorably, his new-found profession emanated a bright path leading to his future. Consequently, Dennis quit college and focused on making a living—a move that would make him an important figure in Hawaii’s print media.

Years since his first stint in the business side of news publishing, Dennis Francis slowly worked his way up the ladder, living in different states around the nation, to eventually become the president and publisher of Star-Bulletin and MidWeek newspapers. And making matters all the more encouraging to him is Hawaii’s exceptional way of captivating guests and making them feel the warmth of the islands and its people.

“I came to Hawaii and I think that’s one of the things that makes my life special is that there is a sense of community here,” Dennis says.

Greater Good Radio brings Dennis Francis—an entrepreneur in a corporate body—with his distinctive management style which he says is an approach that truly adapts to his strengths. Find out more about his entrepreneurial philosophy which he works upon within a corporate setting and why “participating in things outside your normal circle” can be a healthy venture to an individual.

Born in Martin, Kentucky
Grew up in Dayton, Ohio

Left South Carolina in 1986 to work as Circulation Operations Manager in Washington D.C. for The Washington Times. Joined Gannett Corporation in 1987 as Circulation Director in Burlington, Vermont and later promoted to Vice President-Circulation in 1990 for The Hawaii Newspaper Agency at the age of 32. In May of 1998 I was named General Manager of The HNA and later The Honolulu Advertiser. June of 2004 I joined Oahu Publications as President and Publisher for The Star-Bulletin and MidWeek Newspapers.