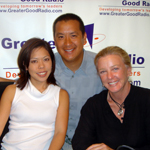 Jean Higgins made a huge leap of faith when she decided to change her professional path—from oceanographic engineering to theater acting. But the move proved to be the right thing for Jean who eventually entered the world of film and TV production—away from the glitz and glamour of being a star, but just as important to keep the show running. Since her transition, Jean became responsible for overseeing the production of more than $500 million in motion picture and television projects.

Jean currently produces the show “Lost” which will run on its third season this year. She says the hit TV program is a perfect show for this day and age due to its delectable escapist quality fit to subvert today’s problems.

In this Greater Good Radio interview, Jean Higgins talks about how her career in the film and TV industry started and the slow process she undertook to be where she is right now. She also shares with us how the production of “Lost” in the State is able to help the community with more than $70 million put into the local economy per annum. Jean tells us how the studio enables her to contribute to the community despite the busy schedule attached to her profession.

The after show may be the best yet, as Jean imparts messages of hope, faith and trust in one’s self. Here she humbly mentions that the greatest accomplishment in her life is her son, despite all the successes she have gone through in her career.

Listen now and find out more about Jean Higgins, film and TV producer.

She began her career as a staff commercial producer for The Petersen Company in Holly wood. The company was one of the premiere commercial production houses in the nation. Clients included Coca-Cola, Anheuser-Bush, Goodyear, and Rockwell International. Her work with Coca-Cola lead to producing corporately sponsored documentaries and PBS Specials.

For Coca-Cola, Jean produced the film that Coke presented to show its history to The People’s Republic of China as the first American Company to do business in China. She traveled the world filming for The United States Navy (and was the first woman in history to be allowed on board an aircraft carrier at sea). She traveled the world for Exxon, General Motors, and the North Atlantic Treaty Organization shooting in such diverse locations as Japan, South Africa, Iran, Saudi Arabia, Brazil, Australia, Norway, Germany, England, Italy, Canada, Greece and more.

Moving into the theatrical entertainment world while still working at Petersen, Jean produced the award winning PBS show “This Far By Faith”, sponsored by AT&T. She then worked for American Cinema Productions, an independent feature production company, quickly moving up to Vice President in Charge of Production. While at American Cinema Productions, Jean was responsible for aspects of developing, producing, distributing and marketing Chuck Norris’ first three feature films, “Good Guys Wear Black”, “A Force of One”, and the cult classic “The Octagon”. Other pictures during this time included work on “Dirt”, “The Entity”, “Silent Scream”, “A Different Story”, “Go Tell the Spartans”, “Charlie Chan and the Dragon Queen”, and “Cheaper to Keep Her”.

Filling the time between features with television assignment, Jean produced ”Perfect Harmony”, “The Ernest Green Story”, winning a Peabody Award, and “The four Diamonds” for the Disney Channel. She worked as Unit Production Manager on the Disney/ABC MOW’s “Tower of Terror”, “Balloon Farm” and “Safety Patrol”. She also worked as the Unit Production Manager on the television pilots for both “The West Wing” and “The Fugitive” television series.

Jean also spent a year with Buena Vista (Disney) and Miramax as Production Executive for Miramax produced films. Pictures she was responsible for overseeing at this time included “Scream”, the first in the series of $100,000,000 grossing pictures, and “Copland”, starring Sylvester Stallone.

Jean then tried her hand at network television, beginning as the Producer of the first season of CSI: Miami for CBS, ending the year as the 3rd rated television show. She then moved to a half season of the critically acclaimed “Line of Fire” for ABC, and is currently producing “Lost” for ABC.

Jean has worked in 27 foreign countries and most major cities and states of the US. She is a member of both the Directors Guild of America and the Producers Guild of America. Her awards for both filmmaking and advertising are as follows:

Plus multiple awards for television commercials