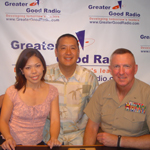 Brigadier General Steven Hummer carries a handful of experience and knowledge under his belt. His more than three decades in the Marine Corps has brought him to work in different divisions within the Marines, and fairly recently, as a commanding officer of the 1stMARDIV in Operation Iraqi Freedom I.

Brigadier General Hummer has received more than a dozen commendations for his enduring participation in the military. And of all the awards and medals he holds, it is the Military Outstanding Volunteer Service Medal that he considers most important—a proof to the military’s commitment in serving not only the nation, but also the local community and its people.

“There are a lot of activities that are beyond the borders of the base where we have involvement,” says Brig. Gen. Hummer. “From Marine Corps Base Hawaii, specifically, we have units that are linked up and coordinated with various schools. So they have kind of an adopt-a-school program but those marines will go and do everything from any kind of manual labor that the school requires.”

“I think our country has really shown themselves as being a giving country,” he adds.

Greater Good Radio proudly brings Brigadier General Steven Hummer of the Marine Corps Base Hawaii as he shares with us the importance of mentorship in one’s growth and development, and an effective way of setting and meeting professional and personal goals.

Listen now to find out more.

BIO:
Brigadier General Steven A. Hummer assumed his current assignment as the Commanding General, Marine Corps Base Hawaii, on 9 September 2005.

He enlisted in the Marine Corps in 1970 and was discharged as a Sergeant in 1973. He was commissioned following graduation from Albright College, Reading, PA.

Civilian education includes a Bachelor of Science degree in Psycho-Biology from Albright College and a Master’s Degree in International Security Studies from the Air War College.