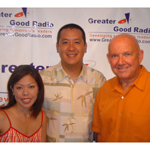 John Webster started working with IBM back in the days when room-size computers were the norm. From sales man to lobbyist, John has come a long way in the company hierarchy where not only did he develop a fruitful career but also a familiarization to social entrepreneurship and public affairs activities. IBM in these days was the leader in socially responsible initiatives, at an era when major corporate activity was at its peak.

Today, he is the director of Hogan Entrepreneurial Program at Chaminade University. Bringing with him an adopted sense of servant leadership from his past career, John strongly advocates social entrepreneurship which the entrepreneurial course is slanted towards.

John believes that community-focused business activities are a key ingredient in longevity.

“The companies that are socially responsible and that are truly engaged in social activity are the ones that survive. And I do believe that,” he says.

“One doesn’t have to be ethical to make money. But I’d like to think that one has to be ethical to stay in business in over the long haul and to provide goods and services that its various constituents really expect and demand,” John adds.

This Greater Good Radio interview offers insights to the successes of some Hogan Entrepreneurial students, and the benefits the program bring not only to its enrollees but also to the community as a whole.

Find out more about John Webster’s endeavor in making Hawaii and the world a better place through social entrepreneurship, only here on Greater Good Radio.

John Webster, who holds a PhD (Business & Public Policy) from the University of Pittsburgh, held Communications and Government Relations positions in IBM in the United States, Europe and Asia for over 20 years. He was Director of Government Relations for KPMG in Washington DC prior to joining the Nanyang Business School in Singapore. He has taught on a Visiting or Adjunct basis at Penn State, University of Connecticut, George Washington University and the American University in Washington DC. As a Presidential Interchange Executive he was a Special Assistant to the Secretary of the Treasury. He served on the Board of the Famous People Players, Toronto, a black light theatre group for young people with physical or mental learning disabilities and on the Board of Big Brothers of the National Capital Area in Washington DC. He has bee active in working with the homeless in Washington.