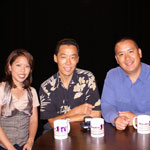 A year later he moved to Hawaii and worked for Milici Valenti. In less than two years, the company’s executives put their trust upon Nick’s skills and knowledge to handle the agency’s largest account, First Hawaiian Bank. In 1984, he was promoted to vice president of the organization, with more top-end accounts under his auspices.

In recognition of his relationships and contributions to the industry, Nick was voted Advertising Man of the Year in 1993 and received the prestigious American Advertising Federation’s Silver Medal Award in 2000.

Evan and Kari bring an exclusive Greater Good interview with the eloquent and talented, Nick Ng Pack. Nick shares how he started in the advertising industry and how his travels to Hawaii as a young man have eventually galvanized him to settle permanently in the islands. He also talks about how he has come to play an important role as member of the Hawaii community and the value he brings to the state as business and community leader.

All these and more only on Greater Good Radio.

BIO:
Born in Trinidad and raised in London and New York, Nick was one of those citizens of the world who always dreamt about taking a Hawaiian vacation. He finally did it in 1978, returned several times over the next few years, and then decided to spend a six-month sabbatical here. That sabbatical turned into a year, then five years, then ten years, and well, you know how the story goes. For the past 26 years, Nick has been living his Hawai‘i dream, which now includes his wife Monica, their four children, and running Hawai‘i’s premier advertising agency.

Nick graduated from Columbia University and then attended NYU for his MBA in Marketing. In 1979, he was hired as an account management trainee at BBDO Advertising in New York where he worked on Gillette, Lever Brothers and General Electric.

He joined Milici Valenti Advertising in 1980, and by 1982 was running the agency’s largest account, First Hawaiian Bank. Two years later, he was promoted to VP, taking on additional client responsibilities with Kahala Hilton, Aloha Airlines, American Airlines, and the Hawai‘i Visitors Bureau. Nick continued his successful career path at Milici and has held titles of SVP, Director of Business Development, EVP, and Managing Director. Since 1994, his name has been on the door. He is now President & CEO of Milici Valenti Ng Pack.

As the head of the agency, Nick ensures that all client-agency relationships remain strong. He works closely with clients and account teams, assisting with overall strategy, product development, and their profitability goals. In recognition of his relationships and contributions to the industry, Nick was voted Advertising Man of the Year in 1993 and received the prestigious American Advertising Federation’s Silver Medal Award in 2000.
Nick is active in the local community, nurturing and creating friendships and partnerships. He serves as a trustee of the Contemporary Museum and the Blood Bank of Hawai‘i.

Nick still gets around the world, whether seeking out business opportunities for MVNP and Firefly Interactive and their clients, or for personal pleasure. One could argue they are both one and the same for Nick.