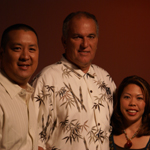 June Jones claims the title of the winningest coach in the history of the University of Hawaii’s football team. In his eight seasons with UH as head coach, June has also bagged the Western Athletic Conference Coach of the Year twice, in 1999 and 2006. All these accomplishments stem from a consequential decision. After being offered a contract to continue as the San Diego Charger’s head coach, June opted to take the head-coaching job at Hawaii when it was offered, choosing an indelible challenge over a sizeable paycheck.

In his many years of involvement with the sport as coach and player, June has been decorated with numerous awards and has helped other individuals reach their full potential in this gridiron sport. In 1982, June was a player coach in helping the Toronto Argos to a division title. In 1984, while coaching in the USFL with the Houston Gamblers, he had two receivers catch over 100 passes for the first time in professional history.

Greater Good Radio brings to the limelight June Jones in a two-on-one interview, featuring the life in a day of a football coach. In this interview, June talks about the day-to-day duties of a team manager, which seems relaxed but is in fact characterized by constant pressure even on rest days. He also shares his miraculous survival after a major car accident, and how this has changed his life believing that it is only through divine intervention that he is still alive.

“God saved me for a reason,” he says. “I didn’t know why I lived through that.”

Find out more about the man behind UH’s successful bounce back to the top of their game. Listen now!

BIO:
In 2006, June was named the Western Athletic Conference Coach of the Year. That makes the second time in his 8 seasons at Hawaii he has won the award. In 1999 he won the award also. In that season he took a team that had lost 18 straight games and with the same players won 9 games, which broke the NCAA record for the biggest turnaround in NCAA history. This season his Hawaii team won 11 games, and in so doing his team set 8 all time NCAA records. This year in 2006 his quarterback, Colt Brennan, set an amazing 16 all time NCAA records. In his 8 seasons at Hawaii, he has won 8 games once, 9 games three times, 10 games once and 11 games this year. He has made 5 bowl appearances and won 4 of them.

As a player, assistant coach, and head coach, June Jones has been a leader and winner at every level. He was a Kodak All American QB at Portland State while leading the Vikings to consecutive 8-3 records. He went from college to the Atlanta Falcons and was on the first playoff team in 1978 and was also a member of the NFL Western Champion in 1980.

In 1982, June was a player coach in helping the Toronto Argos to a division title. The previous season Toronto was a last place team and in one season they made it to the finals and were runner up in the Grey Cup.

In 1983, June was the QB coach for the University of Hawaii where his QB Raphel Cherry set 4 school records.

In 1984, while coaching in the USFL with the Houston Gamblers, he had two receivers catch over 100 passes for the first time in professional history. The Gamblers became the first expansion team to ever win a division. Houston was the USFL’s top offense in 1984. QB Jim Kelly was named the league’s MVP.

In 1985, after switching teams to the USFL’s Denver Gold as offensive coordinator, Jones’ team won the Western Division and again was the USFL’s number one offense.

In 1987-88, Jones was hired to coach the QB’s with the Houston Oilers. He helped Warren Moon to his first of many Pro Bowl’s, along with two consecutive playoff appearances after a 10 year drought. Houston was one of the NFL’s top offense’s both of those seasons.

In 1989-90, Jones became co-coordinator on offense for the Detroit Lions which had finished last place in record and offense the previous season. In the first season the Lions became the 5th highest scoring offense in the NFL finishing with 373 points. During those two seasons Barry Sanders rushed for close to 3000 yards, and averaged over 10 yards a catch receiving.

In 1991, Jones returned to the Falcons as assistant head coach (offense) and in 1991 the Falcons returned to the playoffs for the first time in 10 years. He coached two different QB’s to their first Pro Bowls, Chris Miller in 1991 and Bobby Hebert in 1993. After the 1993 season, Jones was named Head Coach of the Falcons.

In his second season with the Falcons, he took his team to the playoffs. And did this after the Falcons elected to not re-sign their top 4 Pro Bowl players in his first season, Andre Rison, Deion Sanders, Chris Hinton and Michael Haynes. Further amazing it was also done without a first or second round pick in 1994 or a first round pick in 1995. With only two starters still on the team from a 6 and10 team in 1993, in his second season his 1995 team made the playoffs and was the number one offense in the NFL. That 1995 Falcon team set an all time NFL record that still stands with four players going over 1000 yards each, along with a 4000 yard passer. It also marked the only time in his 11 year career that the late Craig “Ironhead” Heyward rushed for over 1000 yards.

In 1996, after he suspended his starting QB, Jeff George, the Falcons finished 3-13 and June was let go as head coach.

In 1998, Jones took over has Head Coach of the San Diego Chargers. After being offered a contract to continue as the Charger’s Head Coach, Jones opted to take the head coaching job at Hawaii when it was offered, where in 8 seasons he has won more games than any coach in University of Hawaii history.