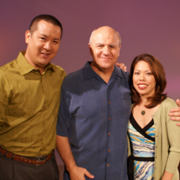 It has been more than 30 years since Rick Blangiardi first stepped in to the television industry, and to him, the journey to the top was a slow but fulfilling endeavor. Rick’s career in the broadcasting business has brought him to different locations around the United States. He has worked with CBS Television in New York, KPIX5 in San Francisco, River City Broadcasting in St. Louis, Missouri, and Premier Horse Network in Los Angeles. Early this year, he has gone back to his roots to become senior vice-president and general manager of KGMB9.

Before his career in this industry, Rick was head coach and defensive coordinator for the University of Hawaii football team. He has spent many years living a dream as an athlete and eventually a coach. However, necessity forced him to change course and find a more lucrative profession to support his family.

The transition was hard for Rick as he faced uncertainties in a career unfamiliar to him. He started as a local sales manager for KGMB. But as he slowly climbed up the corporate ladder, he realized the similarities between coaching a football squad and managing a corporate team. Rick never really left the sport after all.

Greater Good Radio brings back Rick Blangiardi–coach and mentor–and his story on focus and resilience. In this interview, Rick shares how he is able to put his mind into an entirely new prospect as he veers away from an already realized dream. He also talks about the importance of inculcating a sense of purpose in the team so that each member appreciates his role as an individual component of a much larger structure.

Listen to this interview and learn more about Rick Blangiardi’s inspiring story.