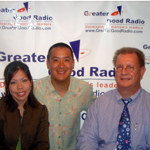 Without sounding arrogant and conceited, Don Chapman outrightly claimed that news is, “what I say is news.” And years of experience in the realm of journalism have put him on a definitive spot to command what stories are to be conveyed to readers.

Author, writer and editor for MidWeek Honolulu, Don plays an essential role in the lives of more than half a million Hawaiian’s; making a difference by providing journalistic views to today’s most important issues.
But he says that it is more of team dynamics that gives MidWeek its appeal to patrons. And the staff’s shared sense of value to their cause makes the free publication standout among the rest.

“The human element is the most important thing,” Don says. “There are those who consider people cogs in a machine and it doesn’t matter who is there and a person will fill the job. But good people are really instrumental.”

“It’s just a lot of good people caring about the product and bringing good ideas forward,” he added.

Don Chapman talks to Evan and Kari about the day-to-day intricacies of running a news publication and the key factors in achieving readership loyalty especially for an advertiser-paid paper. Don shares his journey to realize a dream which stems from his childhood days parleying news stories for show and tell.

Listen to the aftershow and hear about how one feature story in MidWeek changed the people’s perspective about the free publication and how this brought journalistic credibility to the newspaper.

o Editor, MidWeek, Honolulu, November 1994 to present. MidWeek is a tabloid-format newspaper with 268,000 circulation. For 20 plus years we were weekly, and in March 2005 successfully went bi-weekly… In April 2003, we won the Hawaii Publishers Association Pa’i Award for best non-daily paper in Hawaii. The commendation of judges in the Publishers Association awards concluded: “Great job of managing a large publication with numerous departments.”… Within the first year of my becoming editor, MidWeek for the first time in its 10-year history surpassed both Honolulu dailies in readership. A recent survey showed over 60 percent of Honolulu residents now read MidWeek… Helped start six profitable spinoff publications, including weekly community papers and military papers… Duties include managing staff of 12 and stable of free-lancers, story planning for all features, story and photo assignments, page design, editing, writing headlines, writing a column and features, budget planning and management, marketing and promotions.

o Author, “My Kind Of Town,” serialized fiction, Honolulu Star-Bulletin, March 2001 to April 2005. Set in Hawaii and beyond, it utilized fictional, real and semi-fictional characters. Ran five days a week; six “books” in four plus years; a quick must-read for many. I gave it up when MidWeek went twice weekly

o Columnist, Honolulu Advertiser, Oct. 1979 to June ’92. “The Herb Caen of Honolulu,” some alleged. The 3-dot column included about 20 items per day, Monday through Friday, on topics ranging from politics and business to entertainment and sports to food and beverage to kids-say-the-darndest-things and talk-of-the-town. It was the best-read column in Hawaii for years. Also: News and feature stories, travel and golf writing. Circulation rose 30,000 and the Advertiser went from perennial No. 2 to No. 1 during my tenure as lead columnist. Twice named best columnist in Hawaii.

o Author of “You Know You’re In Hawaii When… ” (2003, Mutual Publishing), best-selling local book in Hawaii during the 2003 holidays.

o Author of “Boys of Winter – The Story of the Hawaii Winter Baseball League” (1995, Judgment Books).

o Commissioned by Fodor’s to upgrade and expand golf coverage in its 2006 Hawaii guide.

o Wrote introductory chapter on the history and essence of golf in Hawaii for “Hawaii Golf” (Foghorn Press, 1991).

o Commissioned to edit a book of philosophical sayings from an infamous, self-publishing Hawaii restaurateur, 1999.

oFounding board member/vice-president, Friends of Mauna Ala (supports Royal Mausoleum in Honolulu).

o Past member, board of directors, Hawaii Judiciary McGruff Committee, which introduced McGruff the Crime-fighting Dog to Hawaii.

o Past member, board of directors, Hawaii Cystic Fibrosis Foundation.

o University of Oregon, Eugene, 1973-74. Left school one term shy of graduate degree in journalism to accept sports editor job at East-Oregonian in Pendleton. I needed a job more than another degree.

o Concordia Seminary, St. Louis, Mo., 1972. Turned in my white collar for personal reasons, and have been blessed ever since.