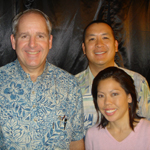 Outrigger’s top executive is instrumental in the company’s expansion both locally and overseas. From Denver, David Carey moved to Hawaii and initially worked for Outrigger East Hotel, which then had 13 hotels in their system. Now, as president and CEO, David helped in its growth to currently handling 57 hotels, condominiums, and resorts—equivalent to more than 11,000 rooms—in Hawaii, Australia, Guam, New Zealand and the South Pacific.

David Carey is also a huge proponent of education, a key figure in the passing of Act 51—or The Reinventing Education Act of 2004, which allows school principals and teachers to “reinvent” their institutions. David is honored as PBN Business Leader of the Year for 2006 for his outstanding performance in the service lodging and hospitality industry.

Evan and Kari interviews David Carey, corporate executive and philanthropist, about his rise to become the top leader of Hawaii’s biggest full-service lodging and hospitality company. David shares why he has become a key advocate in the revamping of the education system in the State, and how he has become such an active promoter of academic learning.

In the after show, he explains the difference between service and hospitality, giving more importance to the latter with regards to the hotel industry. David also shares the qualifications that he looks for in the company’s prospective employees, pointing to hospitability and adeptness to work in a team environment as crucial in the workforce’s values.

This is a must-hear to entrepreneurs who are considering extending business prospects overseas; find out what it takes to have a successful venture out of your existing market.

BIO:
David Carey is president and chief executive officer of Outrigger Enterprises, Inc., a Honolulu-based company that owns Outrigger Hotels & Resorts and OHANA Hotels & Resorts. Outrigger is the largest full-service lodging and hospitality company in Hawaii, and currently operates or has under development 57 hotels and resort condominiums representing over 11,000 rooms and condominium units in Hawaii, Australia, New Zealand, Guam and the South Pacific.

After graduation in 1982, Mr. Carey moved to Honolulu, and was an attorney specializing in corporate and real estate law at Carlsmith Wichman Case Mukai and Ichiki. He handled several hotel and real estate acquisitions, as well as the overall corporate restructuring for Outrigger Hotels, one of the firm’s major clients at that time. Mr. Carey subsequently went to work directly for Outrigger Hotels as executive vice president and general counsel in 1986. He was named president in 1988, and chief executive officer in 1994.

Mr. Carey and his wife, Kathy, have four children. Kathy is an assistant coach for the University of Hawaii’s women’s soccer team.

Nomination of David Carey, President and CEO,
Outrigger Enterprises For PBN Business Leader of the Year

Executive Summary
As a business visionary, an advocate for tourism, and a tireless champion for education and the military, W. David P. Carey III – President and CEO of Outrigger Enterprises – has made countless invaluable contributions to Hawaii’s economy, as well as to the community at large.

Under his leadership, Outrigger Enterprises has evolved to become the largest independent and locally controlled lodging company in Hawaii, and one of the fastest-growing lodging companies in the Pacific.

His vision for Waikiki Beach Walk – a new, $460 million, hotel-retail-entertainment center that is the largest redevelopment project in the history of Waikiki – will bring new life and vitality to an aging part of Waikiki, and serve as a catalyst for further economic development throughout the state.

David has lead the discussion in promoting tourism, both now and in transforming it into a sustainable model for the future. He has played an active role in promoting economic development throughout the state. He has been a dynamic leader in the issues that will shape Hawaii’s future, especially public and private education, and a strong military presence in the islands.

For these and many other reasons, David Carey is Pacific Business News’ Business Leader of the Year.

After graduation in 1982, David move to Honolulu and was an attorney specializing in corporate and real estate law at Carlsmith Wichman Case Mukai and Ichiki. Outrigger Hotels was one of his major clients where he handled several hotel and real estate acquisitions, as well as overall corporate restructuring.

He subsequently went to work directly for Outrigger as executive vice president and general counsel in 1986. He was named president of the company in 1988, and chief executive officer in 1994.

Outrigger Enterprises
Under his leadership, Outrigger has evolved from a small hotel company to a multi-faceted international corporation that is as recognized travel marketing leader.

Not only has the company undergone tremendous growth and expansion under his direction, David has helped make Outrigger a role model for incorporating Hawaiian cultural values throughout every aspect of its operations.

David has also promoted technological innovation throughout the company. Thanks to his leadership, the company was the first non-national chain to integrate on-line technology into its reservation system with travel intermediaries such as Expedia and the major tour operators to the State of Hawaii. To this day Outrigger maintains its status as a tech leader by using technology as a tool to drive down costs and maintain competitiveness in the marketplace.

David’s deep commitment to fostering teamwork and to using “upward” appraisals to promote team spirit and cooperation are just two of the ways he has underscored Outrigger’s dedication to promoting employee advancement and development, not to mention make the company a fun and rewarding place to work.

Thanks to David’s vision and leadership, not only has Outrigger helped promote the romance and magic of Waikiki around the world, it remains one of Hawaii’s most beloved kama’aina companies.

Waikiki Beach Walk
A decade ago, David Carey had a vision to create a new kind of travel destination in Waikiki, one that would re-energize the area and keep Hawaii competitive in the global tourism marketplace.

In April 2005, David’s vision was realized when Outrigger Enterprises broke ground on one of its most exciting endeavors yet — Waikiki Beach Walk, which is expected to open in November 2006.

When completed, Waikiki Beach Walk will capture the best of Hawaii’s natural environment and rich culture, but in an exciting destination complex that will be the first of its kind in Waikiki. Forty retail shops, 6 restaurants and bars, and an open pedestrian plaza integrated among three new and/or completely renovated hotels, and one vacation ownership property will be featured. Visitors and guests alike will want to stroll, shop, dine and enjoy quality entertainment in the lushly landscaped, open-air, Hawaiian-style, setting.

Not only will Waikiki Beach Walk help create new jobs and opportunities for local businesses, it will bring back local residents to Waikiki by creating a gathering place especially for them.

Details regarding Waikiki Beach Walk Phase Two, which is still in the planning stage, will be announced soon.

Supporting Education
David has been an active advocate for quality education in Hawaii. He is on the advisory council of the UH College of Business. He has played a key role in helping the Department of Education to run more effectively and efficiently. In his role as Chair of the Interagency Work Group, David helped the Hawaii State Department of Education make the transition to a more effective and professionally run organization.

In the private school arena, as a Trustee and Chair of the Building and Grounds Committee, David was instrumental in guiding development and construction of Punahou’s new Case Middle School.

Supporting the Military
David has also helped to ensure a strong military presence in Hawaii. He has had a long history of supporting both the senior flag officers and enlisted personnel that temporarily call Hawaii their home. As the Chair of the Chamber of Commerce Military Affairs Council, he has led the MAC delegation to Washington D.C., and has worked with senior military leadership here in Hawaii.

He has also made certain Outrigger continues to make military personnel and their families feel welcome – and appreciated – in Hawaii.

Business Philosophy
David has employed several key philosophies throughout his career. Hire good people, and give them the tools and support they need to succeed. Invest time in explaining the “why” behind business strategies, which in turn motivates and enables people to help you achieve your goals. Most people spend a considerable part of their day at work, so it’s got to be fun.

Activities and Interests
Carey is a member of numerous business and community organizations, including the Blood Bank of Hawaii, the Hawaii Hotel Association, the Board of the Foundation for the Asia-Pacific Center for Security Studies, Hawaii Business Roundtable, American Bar Association, Young President’s Organization, Urban Land Institute and the Hawaii State Bar Association. He is a member and former president of the Oahu Visitors Bureau, on, and a former board member of the Hawaii Tourism Authority, and the University of Hawaii Foundation.

He and his wife Kathy – who is an assistant coach for the University of Hawaii’s women’s soccer team – have four children. Carey is an avid golfer and an occasional tennis player.