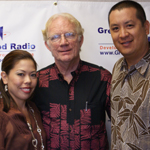 Robert Alm is senior vice president of public affairs at Hawaiian Electric Company. Robert sits as a lecturer for the Public Administration program at the University of Hawaii at Manoa. He serves in more than a dozen community organizations including Helping Hands Hawaii, Boys and Girls Club of Hawaii, and Family Independence Initiative, to name a few.

Robbie is an Honorary Ali’I of the Royal Order of Kamehameha I. He received the Volunteer of the Year Award 2000 from the Alexis de Tocqueville Society of Honolulu. In the same year, the National Society for Fund Raising Executives (NSFRE) awarded Robbie the Outstanding Volunteer Fund Raiser Award.

According to Robbie, a key for companies to successfully build a relationship with the community is to listen. He notes that businesses thrive because of the communities they are in and these communities have expectations on how they should conduct their activities. Without having to meet these expectations, or effectively negotiate a win-win deal, businesses won’t flourish.

“Communities have expectations about how they want to be treated,” says Robbie. “I think you start not by what you want to do as a company, but by what people want you to do—what they have been angry that you’ve done in the past, what they’ve liked that you’ve done, especially when you’re a regulated business like us because we are dependent on what government says is ok for us to do, what the public says.”

“If you don’t ask them, it’s kind of hard to get it right. So the first thing we do is listen. I spend a lot of time listening and we still do that today. It is very important,” he adds.

Greater Good Radio brings Robbie Alm as he talks about his involvement with the Live Aloha Program. Robbie says that the program has drawn hundreds of thousands of supporters from Hawaii and other regions around the world. Since its inception 12 years ago, Live Aloha continues to gather followers, who want to imbibe in themselves a simple yet crucial tenet of individual responsibility.

Learn about the Robbie Alm, the Live Aloha program and much more only here on Greater Good Radio.

University of Hawaii at Manoa:

Born and raised in Hawaii. Married to Cynthia Alm (Attorney, Mediator, and Real Estate Broker); and they have two daughters (Kristin and Rachel).