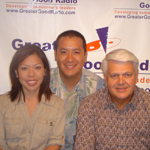 Bob Hiam started off at Hawaii Medical Service Association’s Claims department processing claims for the business, a core activity for an insurance company. Patience and perseverance paid off well that 37 years later, he stepped at the helm of Hawaii’s largest health insurance provider – providing healthcare coverage to more than half of the State’s population.

“It’s an interesting business. It had opportunities,” Bob says. “HMSA was growing and adding business at the time and I believe that being at the right place at the right time has a lot to do with things.”

“I was there and just sort of worked up thru the levels of management and levels of responsibility,” he adds.

Bob never regrets staying with HMSA for the longest time, and working with wonderful colleagues on a job that he loves stands as the most important factor for his loyalty to the company.

“Time goes fast and I’ve never regretted not trying anything else,” he claims.

Bob has passion for his job, and he believes that it is hard to get up in the morning and go to work without a sense of dedication and commitment to one’s mandated tasks. In this Greater Good Radio, he talks about mistakes and the courage to face misapprehensions.

“If anybody goes thru and doesn’t make any mistakes, they probably didn’t do enough or take enough risks,” Bob says.

Listen to this interview and find out more about what it takes to cast longevity in to your career.

May 1983 to December 1984
Vice President of Government Programs and Data Processing
In addition to administrative and executive liaison responsibilities for HMSA’s Government Program Fiscal Agent/Intermediary activities for the Hawaii Medicaid, Medicare Part A and CHAMPUS programs, Mr. Hiam had corporate responsibility for all of HMSA’s data processing activities, including systems development, data entry and electronic claims submissions. He was chairman of HMSA’s Executive Data Processing Steering Committee and the key responsible strategic planner for the company’s long-range data processing plan.

May 1976 to May 1983 Vice President of Government Programs
Mr. Hiam was responsible for overall administration of the Medicaid, Medicare Part A and CHAMPUS programs. He was accountable for all aspects of administering these programs, including liaison responsibilities with the State Department of Social Services and Housing, the U.S. Department of Health and Human Services Health Care Financing Administration, OCHAMPUS, Hawaii Hospital Association, Hawaii Medical Association, Hawaii Dental Association, and State legislative personnel.

February 1970 to May 1976 Various Management Positions

Education Attended Pacific Lutheran University in Tacoma, Washington.
Graduated from the University of Hawaii-Manoa with a Bachelor of Arts in Psychology.

First Hawaiian Bank
Board of Directors

Hawaii Business Roundtable
Board of Directors

Tissue Genesis, Inc.
Board of Directors