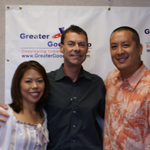 Tim Dick – Founder and Vice-chairman of Hawaii Superferry, Principal behind UseHalf.org, and Co-founder of TRUSTe.org

Tim Dick has co-founded not only some of the world’s top web companies but also a number of web-based initiatives veered towards uplifting the community and caring for the environment. His various programs – TRUSTe.org, UseHalf.com, and Grassroots.org – have made huge and lasting impact on a broad scope of society.

His sense of triple bottom line execution of business activities stems from parental didactics, which he believes has been a significant factor in his proclivity towards reaching out.

“The notion of social responsibility is something that I think you wind up sort of absorbing as a young person,” Tim says.

Tim has expressed enthusiasm about the changing face of doing business in Hawaii and around the world. He said that businesses engaging in social responsibility are broadening.

“There are entrepreneurs and very successful business people who don’t participate that much in social responsibility although I think that’s beginning to change,” he said. “I think it’s really broadening very significantly and the trends that you guys are looking at really is an exploding trend – that has made me very happy.”

With the launch of Hawaii Superferry, Tim has once again influenced society, this time in the realm of sea travel between Hawaii’s islands.

BIO:
Tim Dick is founder and vice-chairman of Hawaii Superferry. He is the principal behind UseHalf.org, an organization promoting energy conservation. Tim co-founded TRUSTe.org which has become the internet’s privacy standard. He is a founding Board Member of Reef Check Hawaii and an active member of the Hawaii Venture Capital Association, and the Hawaii International Film Festival.

· Tim Dick is founder and Vice Chairman of Hawaii Superferry
· Picked as “One To Watch” by the Honolulu Star Bulletin,
· Tim is founder and Vice Chairman of Hawaii Superferry, a company that is bringing energy-efficient & low cost inter-island vehicle ferry service to Hawaii.
· A serial entrepreneur, Tim was previously founder and President of Grassroots.com, a political web technology company.
· In 1995, he founded WorldPages.com, the internet’s first white & yellow pages,
· The company went public and was subsequently acquired Transwestern Publishers (now BT).
· He has raised over $300M of venture capital.
· Previously, Tim was a principal at the Boston Consulting Group (BCG)
· He led CEO-level strategy consulting work on a global basis with significant work in transportation, oil & gas, nuclear generation & electric utility industries
· Boston Consulting Group worked with key industry groups like the Electric Power Research Institute (EPRI)
· Tim was part of the BCG team that developed the landmark privatization framework for Russia’s trillion dollar oil & gas industry
· He helped create options for electric utilities facing end-of-life nuclear power plant issues.
· Before earning his MBA, Tim was a senior engineer at Beckman Instruments
· Here he developed systems, software, and integrated circuit technology for medical electronics.
· He developed the first electronic speech synthesizer for use in hospital intensive care units, and the world’s first instrument-on-a-chip during this time.
· Tim holds an MBA from Stanford University where he was a member of the Public Management Program.
· He also holds a B.S. in Electrical Engineering from the University of California, Irvine where he founded the UCI Cycling Team.
· He serves or has served as Board member and advisor to numerous companies including Hawaii Superferry, Emptor / Accept (acquired by Amazon), Affinity Engines, Biopacific, WorldPages (IPO & acquired by Transwestern Publishers, now BT), Dali Wireless, and Spoxel.
· A believer in social responsibility, he co-founded TRUSTe.org which has become the internet’s privacy standard.
· He is a founding Board Member of Reef Check Hawaii and an active member of the Hawaii Venture Capital Association, and the Hawaii International Film Festival.
· Tim is the principal behind UseHalf.org
· He cut his energy consumption by half between 2004 and 2005 without compromise
· A life-long sailor, Tim was born in England to parents who instilled simple values for which he thanks them enormously.
· In spare moments, he enjoys racing and cruising his well-known sailboat Eau De Vie, spending time with his family, and traveling.
He claims the only items he could not live without are his passport, Macintosh, boat and bike.