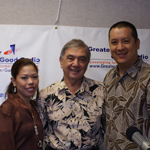 Max Botticelli has been unwaveringly involved in Hawaii’s healthcare industry for more than five decades, and has been at the forefront in advancing the state of healthcare in the islands for many years. He, along with a few colleagues, founded the University Health Alliance as a way of influencing the quality of care that is delivered in Hawaii.

He is firmly dedicated to saving people’s lives both in and out of business. Max has been a member of a number of community healthcare institutions over the years and currently sits on the board of directors of Waikiki Health Center.

Max believes that a key ingredient to running a successful organization and managing hundreds of employees is to have a common goal and unity in direction.

Greater Good Radio brings to you Max Botticelli, president and chief executive officer of University Health Alliance, where he talks about the foundation of UHA and their mission in providing quality healthcare to Hawaiians, especially the disadvantaged.

Listen to this interview and find out more.

1992-1995 Chairman, Department of Medicine, University of Hawaii John A. Burns School of Medicine

4. Botticelli, MG: Manner of death must be ours to choose. The Honolulu Advertiser, January 12, 1997.

1. “Takayasu’s Arteritis: Report of Two Cases”, presented at the Hawaii Regional Meeting of the American College of Physicians, Honolulu, 21 February 1968.

2. “Peer Review: An Effective Means of Developing Education Objectives and Education Programs”, presented at the Hawaii Regional Meeting of the American College of Physicians, 23 February 1972.

5. Faculty Coordinator, Division of Continuing Education and Conferences, University of Tennessee Center for the Health Sciences Course on “Diabetes: Management and Treatment”, March 1979.

14. Teaching in Internal Medicine Meeting (Poster Session): “The Effect of the Systematic Application of Decision Analytic Concepts on the Management of Patients with Sore Throat”, Boston, Massachusetts, November 29, 1989.