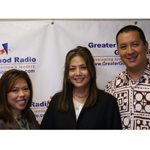 Edgy Lee is Hawaii’s leading female filmmaker. Edgy has appeared in various television commercials, shows, and film features in the state and the mainland. She has worked with various prominent individuals in the music and film industry including His Holiness, the 14th Dalai Lama, and the late “Godfather of Reggae” Joe Higgs.

Edgy uses film and the visual media to promote Hawaii to the world and uplift the cause of the marginalized people of the Islands. She has received various accolades from a number of award-giving bodies including the Aloha Filmmakers Visionary Award at the 2005 Molokai Film Festival, Honolulu Star-Bulletin’s Ten Who Made A Difference in 2005, and Best Cinematography in the 2002 New York International Independent Film &Video Festival.

In 2007 Edgy founded Pacific Network (www.PacificNetwork.tv), an Internet network of nine channels as a “Native Hawaiian portal to the world”. Alliances include Time Warner Telecom, KGMB9 (CBS Hawaii affiliate), Hawaii Public Radio, University of Hawaii, Hawaii Business, Network Media, and several media resources including museums, travel and health organizations.
Evan and Kari Leong talks with Edgy about her career, how she has started in the film industry, and the various prominent film and music talents that she has collaborated with through the years. She talks about Pacific Network, and the inspiration behind this kind of programming that works as the world’s window into Hawaii, its people and their culture.

“30 percent of our programming is directly focused to reach native Hawaiians and one of our biggest mandates is to reach 450 thousand native Hawaiians who live all around the world,” she says. “We know where they are for the most part in the United States, we would like to reach them and we also like to get them to talk to each other.”

Listen to this interview and hear more from Edgy Lee as she talks about the Hawaiian concept of Laulima or working together to achieve a common goal—referring to her media network and its sponsors who strive to connect the world to Hawaii through the visual medium.

EDGY LEE is a fifth generation Hawaii-born producer – filmmaker. Her most recent film,
“The Hawaiians – Reflecting Spirit”, received rave national reviews and currently broadcasts
on PBS (American Public Television). The film looks at Hawaii’s indigenous culture and their understanding of ecosystems oriented to sustainability; how the future of Hawaiians and
other native cultures impact others. The film was presented at the opening of the Smithsonian Institution’s Museum of the American Indian in Washington DC.

Edgy also produced two feature films on methamphetamine in unprecedented prime time simulcasts (eleven television stations through out the State of Hawaii) and continues to produce
short films on various social issues. Other feature documentary work includes the award winning
“Waikiki In the Wake of Dreams” and “Paniolo O Hawaii ~ Cowboys of the Far West”.

Veteran Los Angeles Times film critic, Kevin Thomas, wrote “What Lee has done in irresistible
fashion is a splendid example of the enduring power of the traditional documentary. The kind
that brings alive an unfamiliar world in a straightforward manner that is as entertaining as it is informative.”

Other films include, “Papakolea, Story of Hawaiian Land”, recipient of the prestigious
Silver Award from the Corporation for Public Broadcasting, Independent Program. In 1999
Edgy produced a CD with His Holiness the 14th Dalai Lama, a compilation of rare traditional
Tibetan music performed by Tibetan artists living in exile around the world, with narration by
Rev. Abraham Akaka and chant performed by Kumu John Lake.

Classically trained in piano and violin, Edgy left Hawaii to study fine art at the San Francisco
Art Institute. Living in California, she began modeling for the Nina Blanchard Agency and for the
next fifteen years, appeared in numerous television commercials, series & feature films including
The Tonight Show with Johnny Carson and as co-host of the children’s series, “Bill Cosby’s Picture Pages”. In 1987 she began to independently produce and write. As an in-studio record producer,
she worked with the late, famed Jamaican “Godfather of Reggae” Joe Higgs; The Wailers, and other artists. She has also composed music with jazz legend Wayne Shorter (CBS Records) and film composer, Joseph Vitarelli.

Edgy’s latest project is scheduled to launch in Fall 2007. It is the Pacific Network, an Internet network of nine channels designed as a “Native Hawaiian portal to the world”; a nexus for gathering and distributing news, entertainment, educational programs, event listings and interactive media.