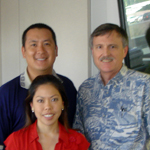 Dr. Kent Keith holds an eclectic educational background; from Harvard, taking BA in Government, to Oxford, as a Rhodes Scholar, then moving on to take Japanese at the Waseda University in Tokyo, his J.D. from the University of Hawaii and Ed.D. at the University of Southern California

He has practiced law, been a cabinet member for the State of Hawaii, and held a six-year tenure as president of Chaminade University. But his greatest achievement is his bestselling ‘Anyway: The Paradoxical Commandments’, receiving worlwide recognition that the likes of Mother Theresa has even hung a poster of the decalogue on her wall.

And his writings were not restricted to the physical world. The commandments’ prevalence has reached even the arena of fiction, appearing in Superman: The Never-Ending Battle (2004). Two other titles follow his popular writs, ‘Do It Anyway’ and ‘Jesus Did It Anyway’, released in 2003 and 2005 respectively.

As an active speaker, he has conducted over 800 presentations and seminars and has been featured in various publications. This Greater Good Radio interview is one of his many TV and Radio appearances in America, Europe and Australia. Evan and Kari speak with Dr. Kent Keith about his Paradoxical Commandments and how these were born, eventually becoming one of the most influential maxims of recent times. Dr. Keith also explains how he has become University president citing ideological reasons for engaging in academia.

Don’t miss the aftershow where he talks about the two forms of leadership; command and servant, and how the latter turns out to be more influential. This is an interview fit for all professions, especially those who are searching for meaning in what they do.

“The idea is that no matter what the world does to you, you need to do what’s right, good and true and that will give you meaning and if you have meaning you don’t have to look for glory,” Dr. Keith said.

Listen now to Dr. Kent Keith and learn how to live a more fulfilling life.