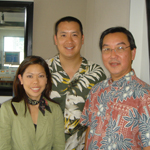 Colbert Matsumoto has truly come a long way from being a small island kid to chairman and CEO of Island Insurance Co., part of the state’s largest locally owned and managed property and casualty insurance carrier. Prior to becoming a company executive, Matsumoto worked for 20 years as member of the Hawaii Bar.

Greater Good Radio brings Colbert Matsumoto with his endless list of for-profit and non-profit involvement. Colbert talks to Evan and Kari about how he manages to organize himself during the long hours spent communicating with different groups of people during the day, and how his former teachers in the island of Lanai have set a positive influence in him to dream of becoming an advocate of education himself.

He also shares how he has become big boss of Island Insurance Co., it being his client for over 20 years.

This interview is specially catered for the big dreamers, filled with insights on how luck and perseverance play a tandem and why community-involvement is still the best way to achieve success.

Colbert M. Matsumoto is the Chairman and CEO of Island Insurance Company, Ltd., Hawaii’s only locally owned and managed property and casualty insurance company. Prior to joining Island Insurance in 1999, he was engaged in the practice of law as a member of the Hawaii Bar for over 20 years.

Matsumoto is active with various community non-profit organizations and has been involved with numerous fundraising efforts on behalf of several non-profit entities. He is a director and past chairman of the board of the Japanese Cultural Center of Hawaii. Matsumoto also serves as a trustee of the Employees Retirement System of the State of Hawaii and is a director of the Hawaii Institute for Pubic Affairs. He is a member of the Board of Governors of the Japanese American National Museum and is a member and past president of the Honolulu Chapter of the Japanese American Citizens League (JACL). Matsumoto received JACL’s Outstanding Community Service Award in 2004 for his leadership in connection with the $9 million campaign to save the Japanese Cultural Center of Hawaii from foreclosure. He is also a member and founding president of the Hawaii Chapter of the National Asian Pacific American Bar Association (NAPABA). In 1994, Matsumoto was awarded NAPABA’s Trailblazer Award for his leadership in the Asian-American legal community. Matsumoto previously served as the at-large member of the Board of Land & Natural Resources of the State of Hawaii from 1995 to 2001.

Matsumoto is married with two children.