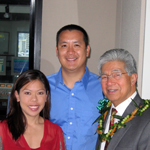 Daniel Akaka – U.S. Senator for the State of Hawaii

Senator Daniel Akaka’s social involvement has its roots from the beginning of his working career. Senator Akaka’s public service began in the mid-40s as a welder-mechanic for the US Army Corps of Engineers, gradually making his way to mainstream government to become the United States’ first senator of Native Hawaiian ancestry—after years of serving the State of Hawaii in various departments.

Senator Akaka is a ranking member of several governmental committees including the Veterans’ Affairs Committee, and the Energy and Natural Resources Subcommittee on National Parks Historic Preservation and Recreation amongst many others. He has received more than half a dozen awards and recognitions throughout the course of his political career.

Senator Akaka has been in the education sector for 15 years, and has even christened an institution, Pohakea School at Ewa Beach. To him, the name means enlightenment, to instill the importance of education to young people. He is a huge advocate and a strong believer in the power of education.

Greater Good Radio introduces Senator Daniel Akaka with his soft-spoken, mild-mannered way of conveying a message of fulfillment through helping the disadvantaged and guiding the youth towards the right path to success through education. Senator Akaka talks about his career and how he has made it to become a significant figure in Hawaiian, and U.S. politics.

Listen now and hear him sing about the ‘rainbow’ pertaining to the diversification of the people of these islands.

Like many of his generation, Senator Akaka’s youth was interrupted by World War II. Upon graduation from high school, he enlisted in the U.S. Army and served in the Army Corps of Engineers from 1943 to 1947.

Following the war, Senator Akaka returned to school enrolling in the University of Hawaii. A strong believer in the power of education, he made it his career, as a teacher and principal in the State of Hawaii Department of Education.

First elected to the U.S. House in 1976, Congressman Akaka was appointed to the Senate when Senator Spark Matsunaga passed away, subsequently winning election to the office in 1990, and re-election in 1994 and 2000.

Raised in a deeply religious family, Senator Akaka is a member of the historic Kawaiaha`o Church where he served as choir director for 17 years. He and his wife Millie are the parents of four sons and a daughter who have blessed them with 14 grandchildren and four great-grandchildren.