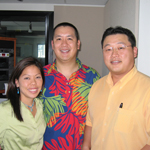 Jeff Chung and KBFD TV took an unprecedented leap in the local Hawaii media and grabbed the opportunity to bring Korean and other Asian films and TV shows in to the Islands’ broadcast spectrum. With the introduction of subtitling, Asian programming has become even more popular, not only with Asian-Americans but also the whole community.

Greater Good Radio brings Jeff Chung, president and general manager of KBFD TV; and vice president of The Asia Network, the first Korean cable network carried by cable systems in continental US. In this interview, Jeff talks about his role as chairman of the board of the Hawaii International Film Festival—being the first to be a leader of a major film festival outside of Korea that is of Korean ancestry. He also speaks of the role of the media, especially television, in shaping the society—and in his case, being able to provide for and influence the ethnic community in the State of Hawaii.

Listen now and discover more about Jeff Chung and his belief in the power of the media, and how he uses this power for the greater good of the society.

Vice President of TAN; The Asia Network; The first Korean Cable network carried by cable systems in continental US. Also privately owned by the Chung family.

President and Chairman of the Board of Directors: for the Hawaii International Film Festival 2005. HIFF celebrates its 25th anniversary in 2005.

First to be a leader of a major film festival outside of Korea that is of Korean ancestry.

Intermediate Advisor: Board of Directors Oahu Country Club 2003 and 2005.

Fluent in Korean and English