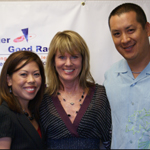 Marsha Nadalin trudged the arduous path from employee to business owner – in the process acquiring skills, knowledge and experience to stand as cream-of-the-crop in the cosmetology industry in Hawaii. Marsha brought Susan Thomas Salon in 1993 and changed its image and expanded its services to appeal to both male and female clients.

But Marsha has never forgotten the community that has helped bring to her all the accomplishments and successes. Marsha Nadalin is involved in charitable projects that benefit not only the local community but also other communities in times of need.

Listen to this interview and find out more about Marsha and her business, and how they help in making Hawaii thrive – only here on Greater Good Radio.

1971-1973 I worked at different jobs trying to figure out what I wanted to do; ice cream parlor,
Bank of America, should I do what the rest of my family does and be in banking, restaurants, and took a lot of art classes at Palomar College in Palomar, California.

1975-1979 Mitch and Co Haircutters-Worked as an assistant to the owner Mitch, and was given my own
Styling chair soon after and started building my own clientele.

1979-1980 Traveled for a year with my best friend Mary Hildebrandt. We went to Fiji Islands, New
Zealand, Australia, Indonesia, Singapore and Thailand. We had an unbelievable experience.

1980-1982 Hawaii was the last stop of our travels where I met up with my sweetheart from California, Steven Nadalin. I worked at International Haircutters in Koko Marina Shopping Center as a hairstylist. The shop was relocated in the same shopping center and renamed Sean Thomas Salon.

1982-1984 Sean Thomas Salon- I was given the opportunity to earn 20% of the salon by managing and overseeing the business for the owner Sean Giannetti. This was a great chance for me to begin attaining skills to further my career as a possible salon owner myself one day. In 1984 the salon was sold and renamed again to Ambiance Salon. As a result I received my 20% payment and used the money for a downpayment on a townhouse in Hawaii Kai. What a break!

1984-1993 Ambiance Salon- I worked for the new owners as a hairstylist and became the top in the
salon.

1993-2006 Marsha Nadalin Salon- I had another opportunity knock when the Percy Ansai, owner of
Susan Thomas Salon, in Kahala Mall called me out of the blue to offer to sell me the salon.
She had heard of me and my good reputation in the industry, and wanted to sell the business
to someone in the beauty industry that cared and had passion for it. We came to an
agreement and I became the proud owner of Marsha Nadalin Salon. In 1995 we remodeled
the salon to give it an up to date look, attracting female and male clients. In 1998 we
expanded adding a spa where we offer facials, nails and massages. In 2000 we opened the
Marsha Nadalin’s Aveda Experiencing Center in the Kahala Mall between Macy’s and
Long’s Drugs. In 2004 we opened the Annex Marsha Nadalin across from Marsha Nadalin
Salon and Spa, where we added 6 more hairstyling chairs.