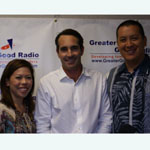 Greater Good Radio brings to the airwaves Dustin Sellers, co-founder of ProService Hawaii, one of Hawaii’s largest outsourced employee administration companies. In this interview, Dustin talks about the inception of ProService and its “soulful” origin – having been founded in the outer islands.

He shares his opinion about soccer and why he believes that the state will be able to produce top-notch talents to represent the whole country. Dustin likens the sport to business, which he says “is a long game with a few goals that make all the difference”.

ProService Hawaii represents close to $200 million in payroll with the average company having 20 or less employees. Dustin leads this dynamic organization in both its business and community endeavors.

“We spend about 300,000 dollars a year in the traditional large charitable donations but we do a lot of giving back to the community through giving our services for free,” Dustin says. “There’s a number of organizations that we’re talking to now that we feel are doing really unique things in the market place where we can actually provide our services for free; giving them great healthcare rates, great workers comp rates, great TDI, in a way that they could not afford normally because they’re non-profits.”

Dustin is on the advisory council for the Nature Conservancy and on the board of directors for Honolulu Bulls.

Listen and find out more about Dustin Sellers with his stories on the ups and downs of being an entrepreneur.

A passionate entrepreneur and loyal kama`aina, Dustin Sellers serves as president of business development and marketing for ProService Hawaii. With more than 15 years of senior level management experience, he is responsible for business development, marketing and client service for the state’s largest outsourced employee administration company.

Prior to joining ProService Hawaii, Sellers served as general manager and senior director of marketing for Ingenio/Keen, Inc. a start-up e-commerce company in San Francisco. While there, he oversaw all aspects of key revenue producing categories for the $90-million company, growing the business 110 percent during his tenure as general manager. Before that, he worked as a senior manager for Potomac Partners in Los Angeles and manager/senior consultant for Braxton Associates/Deloitte Consulting in Los Angeles and Chicago.

Sellers resides in Hawaii with his wife Lisa and three children, and enjoys spending his spare time surfing, skiing, playing soccer and fishing.