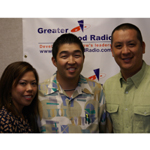 Stan Masamitsu not only inherited a thriving business in a dynamic industry, he has also been imbibed, through his parents, with a heart and mind veered towards helping other people—albeit initially, Stan’s intention of joining non-profits was to publicize his company. But to Stan, being able to contribute in a charitable way has had its greater fulfillment.

“As I was getting involved in some of these non-profits I have personal satisfaction in knowing that I could be of assistance to somebody,” he said.

Stan is the brain behind Tony Group Autoplex, Hawaii’s first auto mall. Stan conceptualized, built, and relocated dealerships into the complex, which began servicing the public in 2001. He was named “40 under 40” Business Leader of the Year by Pacific Business news in 2006. In 2007, Stan is nominated for the Time Magazine Quality Dealer Award.

In this Greater Good Radio exclusive, Stan talks about the pros and cons of being the “boss’ son” and how he has proved himself worthy of being the company’s top honcho. He also shares the value of being able to physically be in contact with his employees, which number to more than 500 individuals.

“I don’t have an opportunity to talk to a lot of customers on a daily level so what I end up doing is more trying to have a connection with the people I work with so they basically become the extension of me,” he said. “Just walking around or going on lunch with them or publicly recognizing them with something good that they did.”

All these and more only here on Greater Good Radio. And have your copy of The Greater Good: Life Lesson’s From Hawaii’s Leaders signed on Tuesday, November 13 at 6pm at Barnes & Noble Ala Moana, and Saturday, November 17 at 12.00pm at Borders Ward Ave.

PERSONAL DATA
Family moved to Hawaii from Japan at 7 (fluent in Japanese). Married with 2 children. Enjoy playing golf and basketball.