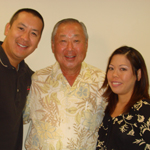 He is a member of Saint Louis’ Gallery of Distinguished Achievers for his community leadership and outstanding contribution to the betterment of Hawaii and for upholding the banner as an exemplary Saint Louis gentleman.

Greater Good Radio hosts Evan and Kari Leong talks to Walter about his career and the different challenges he has faced in his multi-faceted track record. Walter, who has sat in the Board of Trustees of Saint Louis for many years, mentions that the presidency turned out to be much harder than initially thought.

“The issues are much more evident being in the administrative position,” he remarked.

But despite the blockades, Walter continues to push through with his mission of serving the community, primarily through education and volunteerism.

“I’m very interested in doing what I can to perpetuate the lessons I’ve learned throughout life,” he said. “I can honestly say that the conversations I’ve had with law clerks were the best times in my judicial days. It was a great opportunity to shape their young minds.”

Walter, who to this day serves the Specialty Courts of the Family Court, vouches for the importance of respect in personal and professional success.

“Respect to me is the fundamental value that one has to learn in order to be successful,” he mentioned. “From respect, you develop people relationship and leadership qualities.”

In this interview, Walter narrates the milestones that have led him to become a Hawaii judge, and talks about the importance of providing education to public and private schools about the country’s judicial system.