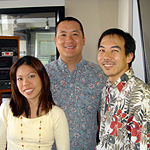 “If there’s one thing we know how to do, that’s apply to schools.”
Andrew Aoki speaks candidly about his extensive educational background, having studied in top universities including Harvard, Stanford, and University of Michigan.

But despite his broad educational experience, Aoki chose to serve the public.

He is a co-founder of 3-Point Consulting, which works with community-based organizations in their business strategic planning, combining their social mission with business reality of staying financially viable.

In addition, he co-founded College Connections Hawaii, an education consultancy firm focusing on providing educational information, accessibility and counseling to children and families.

He says, “Think really deeply of what’s important in your life and make your life reflect that. If you’re clear about what you want and not want too much, you can be pretty happy on all fronts.”

And when asked about how he views social entrepreneurship, he answers, “Not only would I recommend that, I feel that we have an obligation to do that I mean if our society is going to get better and if you have young kids and if you think about the world they’re going to live in years from now. If you want them to live in a place that’s safe and bring out the full quality of their life, you have to invest now.”

In this interview, Aoki talks about public service as a genuine calling in his life. Listen to the main interview and aftershow to find out more about how he handles a life dedicated to serving other people.