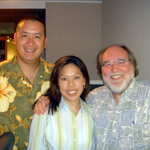 Congressman Neil Abercrombie’s discovery of the exoticism of Hawaii seems to be serendipitous. During one dark and freezing New York winter, he saw a poster—with the sun, sand, and palm trees—advertising a scholarship offering from the University of Hawaii. He applied and got accepted.
Upon reaching the islands, he said, “I realized I was in paradise in about ten minutes. I never left.”

While working as public school teacher, he went to the University of Hawaii at Manoa where he obtained his doctorate in 1974. Subsequently he joined the UH faculty system as a professor of sociology.
Currently he is in the United States House of Representatives representing the First Congressional District of Hawaii and has been incumbent since 1991.
Besides his position as a public servant, Abercrombie has also served in the boards of various health and human rights-oriented organizations such as the Hawaii Special Olympics, the Epilepsy Foundation of America, Friends of Father Damien, Variety Club (Tent 50), the Life Foundation/AIDS Foundation of Hawaii and Amnesty International.
Greater Good Radio brings to you Cong. Neil Abercrombie and his thoughts on unrequited service towards Hawaii and its people. He also talks about his involvement in various charities and organizations and his endless support for civil and human rights.
Find out more, only here on Greater Good Radio.

BIO:
Congressman Neil Abercrombie is one of Hawaii’s best known and most respected public figures. Even those who differ with him politically applaud him for his honesty, integrity, and commitment to Hawaii. Recently, a man who described himself as a conservative republican who often finds himself at odds with Abercrombie’s positions on issues went on to say, “but I respect Neil because he always tries to do what he believes is best for Hawaii. He has Hawaii in his heart.”

The future Representative for Hawaii’s First Congressional District was born in Buffalo, New York. He had already earned a BA degree in Sociology from Union College in Schenactady, New York before he came to Hawaii in the 1960’s to continue his education. He earned his Masters degree in Sociology in 1964 and a Ph.D. in American Studies in 1974 from the University of Hawaii. Not all of his learning was in the classroom. Congressman Neil Abercrombie worked at a series of jobs that would help shape his outlook. They include waiter, custodian, probation officer, graduate teaching assistant, college lecturer, professor, construction apprentice program director, and special assistant to the State Superintendent of education. And he was able to benefit from the astute observations and advice of his wife, author and educator Nancie Caraway.

In 1971 he began hosting one of Hawaii’s first phone in radio programs – Viewpoint on KHVH Radio. His on-air guests ranged from film stars to political leaders to counter-culture advocates, but Abercrombie always made his callers the real stars of the program. In keeping with the name of the program, he wanted to hear their viewpoints. Unlike many of today’s talk radio hosts, Congressman Neil Abercrombie did not ridicule his callers. He did not hesitate to make his own views known, but when he disagreed with a caller it was always done with respect. When a co-worker at the radio station commented about his way of dealing with callers, Abercrombie responded, “You can learn a lot from people who don’t see things the same way you do, but they won’t tell you how they feel if you insult them.” Thousands of people in Hawaii let Neil Abercrombie know how they felt on a variety of issues. Many of them enjoyed a spirited, but respectful debate with him on the air. The radio program allowed Congressman Neil Abercrombie to connect with Hawaii’s grassroots in a unique way. What he learned helped him launch his political career.

Abercrombie was elected to the State House of Representatives in 1974, exactly twenty years after the ‘Democratic Revolution’ that reshaped Hawaii’s political structure and paved the way for the Island Territory to become the 50th State in the American Union. Many of the people who played key roles in those history-making events were still in government. So the young American Studies scholar and new State Representative was given still another unique perspective on his adopted homeland; another opportunity to learn and to apply what he had learned to the art of lawmaking.

Congressman Neil Abercrombie served two terms in the State House of Representatives then ran successfully for a State Senate Seat. During his eight years as a State Senator, he chaired the Senate Committees on Education, Higher Education, and Human Services. He was elected to the Honolulu City Council in 1988 and served for two years.

He became Congressman Abercrombie the first time in 1986 when he won a special election to the U.S House of Representatives. In 1990 the voters of Hawaii’s First Congressional District sent him back to the U.S. House. He is a member of the Armed Services Committee, where he is the ranking Democrat on the Military Personnel Subcommittee; and the Resources Committee. He also serves as Democratic Whip-At-Large.

Seniority in the House

Congressman Neil Abercrombie brings seniority, experience and credibility to the job of representing Hawaii in the U.S. Congress. Now in seeking his ninth full term, he is widely recognized as an exceptionally effective, knowledgeable and hard working advocate for our state.

After being elected to the U.S. House of Representatives in a 1986 special election, Abercrombie was returned to Congress in 1990 and re-elected in every election since then. He is now senior to every House member elected since 1990, ranking 92nd of 435th in seniority. He ranks 51st among the 202 Democrats in the House.

Congressman Abercrombie has used that seniority to establish relationships on both sides of the aisle, develop trust and credibility among his colleagues, and make a convincing case for Hawaii’s needs. Congressman Abercrombie played a key role in keeping the Pearl Harbor Naval Shipyard open when the Base was threatened with closure.

Over the years Abercrombie has secured Congressional authorization for more than $3.0 billion in Hawaii military construction projects, millions more for transportation infrastructure, and support for our military industry.

A Long and Distinguished Road to Congress

Congressman Abercrombie began his political career in the Hawaii State House of Representatives in 1974. After two terms in the State House, he was elected to the State Senate, where he served for eight years. He chaired the Senate Committees on Education, Higher Education and Human Services. He also served on the Honolulu City Council from 1988 to 1990.