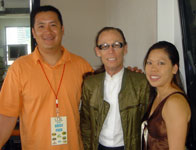 Jon de Mello is the big man on campus when it comes to Hawaiian Music. The way he went from art school to music production is a captivating story that has many twists and turns. Especially interesting is how he developed his business skills.

In 2002, he became the first producer from a Hawai’i record label to have achieved an RIAA certified Gold Record and in 2005 achieved Platinum. Jon was instrumental in the Grammy Awards adding the Hawaiian Music category in 2005 and 3 out of the 5 nominees were represented by Jon and his company.

So how did he go from a studio artist and painter to a media mogul? That’s no short story and it spans over 30 years. Jon was mentored by very successful and already established business men in his early years. Team that with his artistic talent, passion, community focus and a bit of good fortune and what you have is magic.

Jon shares with us how community involvement makes good business sense and talks about integrating programs into his business. This commitment to the community is one of the main reasons he’s become so successful.

Some questions asked:
Can you tell us a bit about The Mountain Apple Company and what they do?

Where did the name Mountain Apple come from?

What does a music producer actually do?

How did you get started?

What influence did your father have on your success?

How has that helped your business?

How long did it take to see success?

How did you make the leap from being an artist to becoming a business executive?

Where do you find talent?

What do you consider talent?

What is the most important thing for an artist to work on to become a successful artist?

How did you learn your business skills?

How can an artist get you to listen to their music?

What are the biggest mistake that artists make when trying to make a career?

What community organizations or non profits are you involved with?

BIO:
Jon de Mello is Hawai’i’s foremost leader in the area of music recording, distribution, publishing, licensing and talent management. As Owner and President of The Mountain Apple Company, he has built the company into a successful business that competes on an international arena in the sales and marketing of Hawaiian and island music.

That dedication to the music and the artists that The Mountain Apple Company represents is evident in the successes that he has received. He has produced over 150 recording projects that range from traditional Hawaiian to contemporary Hawaiian to island music. In 2002, he became the first producer from a Hawai’i record label to have achieved an RIAA certified Gold Record and 2005 achieved Platinum. He worked closely in developing a CD that was nominated on the 2002 final Grammy ballot for “Reggae Album of the Year.” The recording projects he has developed and worked with have garnered almost 100 Nä Hökü Hanohano Awards (Hawai’i’s version of the Grammys).

Jon de Mello was born into a musical family. His great-grandfather, who came to Hawai’i in 1889 on one of the first Portuguese immigrant ships, played the ‘ukulele, Portugal’s contribution to Hawaiian music. His father operated one of Hawai’i’s oldest recording companies, Music of Polynesia, and made his mark by adding lush orchestration to traditional Hawaiian music.

Jon began playing the piano at the age of five, and began learning his father’s trade by sitting in on recording sessions and business meetings. His interest expanded to fine art, and he studied painting at the California College of Arts and Crafts, graduating in 1970 with a fine arts degree. When he returned to the islands, he continued his artistic studies at the University of Hawai’i while simultaneously embarking on several business ventures. One was an art gallery where he featured his own paintings, offering them to prospective customers in a theatrical atmosphere of lush music and dramatic lighting. He operated this gallery for two years, selling his large paintings in the $1,500 to $5,000 price range.

Jon de Mello also joined a hui (Hawaiian for partnership) of business people, mostly older than he, who were investing in several commercial ventures such as restaurants and retail stores. During his five years of participation in this group, Jon increased his business acumen by familiarizing himself with various day-to-day aspects of business, including personnel management, tax laws, and construction.

While participating in his father’s business by designing album cover art and assisting with research and development, Jon continued to observe and learn by frequenting the company’s studios and conference rooms. He purchased a small mixing deck and began writing and producing music. He brought a new group that he managed, The Brothers Cazimero, to his father’s company, where they recorded their first three albums.

Jon was instrumental in getting The Brothers Cazimero a headlining position at the prestigious Monarch Room in the Royal Hawaiian Hotel in Waikïkï, the only Hawaiian show at a major venue in Waikïkï during this time. The show ran successfully for 12 years. Today, close to 30 years later, The Mountain Apple Company still manages this perennially popular group – a long-term relationship almost unheard of in the music industry. Jon’s personal touch – innovative, high-concept set designs and production have become trademarks for the group’s live performances.

When his father retired, Jon merged Music of Polynesia with The Mountain Apple Company, becoming the owner of the most extensive library of Hawaiian and Polynesian music in the world. The Mountain Apple Company’s focus, however, remained on creating and producing contemporary music, helping young musicians and groups record their songs, market them and deal with the problems and opportunities of marking their living as performing artists.

Over the years, Jon developed a business style that the artists who signed with The Mountain Apple Company came to appreciate greatly: he would involve them only as much as they wanted to be in the total creation and marketing of their music. Some artists eagerly became involved in the design, production and business aspects. Others preferred to focus solely on songwriting and performing, leaving their career interests to Jon’s management.

Today, Jon is more of a Renaissance artist/business person than ever, thanks to progress in technology and his own relentless pursuit of creative excellence. On a number of separate computer workstations and in a state-of-the-art recording studio, he composes original music for television shows and motion pictures, mixes and arranges recordings of his company’s artists, designs album covers and point-of-purchase display material, edits music videos, explores the worldwide web, and generally engages in any form of multi-media art that captures his fancy. He also served as an entertainment consultant to Sheraton Hotels’ Pacific Division, Westin Hotels, and the SS Monterey Luxury Liner. Jon accomplishes all of this in addition to serving as chief executive officer and inspirational mentor of The Mountain Apple Company, which has evolved from a local record company into an international producer, distributor and marketer of music from Hawai’i.