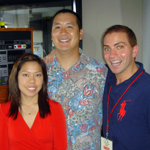 Greater Good Radio has had the opportunity to interview Hawaii’s adopted children—mainlanders coming in to the islands and establish themselves as entrepreneurs and philanthropists.

Joey Caldarone is one of these people; making Hawaii his home, founding his own business and engaging in community outreach.
The state has been a regular travel destination for Joey and his family since the 80s. But it was only five years ago that he decided to stay for good. Here, he was able to establish himself as a real estate agent and recently, owner of an interior design and consulting firm in his namesake.

Caldarone’s creativity stretches across different disciplines; from visual to performing arts. He has created and sold highly-priced paintings locally and abroad; he has starred in Miss Saigon as the lead role of ‘The Engineer’; and will be traveling to Japan for an album recording.

In this interview, he talks about his experience in the interior design industry and the many enclaves that he has developed.
He also shares his stint at and how he contributes to the local performing arts industry.

Find out more about Joey Caldarone and his involvement in the Manoa Valley Theater and how he uses local outsourcing to assist his one-man workforce.

Joey Caldarone originally hails from New Jersey, but has had a Hawai’i connection since the age of four when he and his family first came to O’ahu in 1980. He returned often throughout the years, and made Hawai’i his permanent residence almost five years ago. Upon graduating from Cornell University with a B.S in Hotel Administration, in 1999, Joey moved to North Carolina and worked in development research at Duke University while concurrently owning a café. In 2001 he moved back to the New York area and had a brief stint as a commercial real estate analyst with Cushman & Wakefield. During that same year, while on vacation with his family on O’ahu, Joey decided not to return home one hour before his scheduled flight, and from that moment on Hawai’i became his new home.

Soon after, Joey became a real estate agent with Case Properties International, under the guidance of the highly respected Patricia Case, Esq., and flourished as a realtor. In 2003, Joey met a talented New York interior and architectural designer named Geoffrey Hassman, and he had the great fortune of being mentored by such a talent while establishing a thriving business together. Together, they designed and renovated several million dollar oceanfront “Gold Coast” condominiums and homes in the Diamond Head and Kahala area. Two of these projects were featured in Hawaii Home and Remodeling. Joey branched out on his own in 2005 and began Joseph Caldarone, Inc., an interior design and consulting firm. He has recently finished several new projects, including a popular night club and several high-end condominiums and homes. In 2005, Joey sold his first development project, a three million dollar home on Kahala Ave., which turned out to be a great success and training ground for future endeavors.

Additionally, Joey has become known as a local performer for his portrayal of leading roles at Diamond Head Theater (DHT), Manoa Valley Theater (MVT), and Army Community Theater (ACT). You might have recently seen him as “The Engineer”, in ACT’s Miss Saigon. He also received a Po’okela Award for the role of “Mary Sunshine” in DHT’s Chicago. Joey also emcees fundraising galas, sings at various Honolulu venues, has been featured in several local independent films, and has guest appeared in local television programs on OC 16. In addition to the performing arts, Joey is also a painter, with his oversized abstract work currently being featured at the W Hotel’s Diamond Head Grill. He has also attained great success in selling his artwork, with high profile patrons from Honolulu and Japan.

Giving back to the community has become a major emphasis in Joey’s life. He is a tireless supporter of the arts in Hawaii and believes that these organizations are what makes Honolulu more international and cosmopolitan. Currently, Joey serves on the board of directors of The Manoa Valley Theater. He also is highly involved with Diamond Head Theater, Army Community Theater and The Contemporary Museum. Joey has served on the executive committee for Contempo for the last three years, served as one of the décor co-chairs of last year’s Heart Ball and DHT’s 90th Anniversary Gala, as well as chaired the first Honolulu Symphony Associates Fashion Show fundraiser. Joey was also recently honored by the HUGS organization for his contributions. Giving of both his time and resources, he has been involved in various events and organizations.