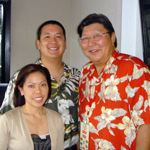 Jeff Watanabe can be perceived to be the most powerful man in Hawaii—if you consider his position as chairman of the board of Hawaiian Electric Industries, which supplies 93 per cent of the State’s energy to electric utility companies.

And his position in the company is just one of his many roles as member of the board of 16 for-profit and four non-profit organizations. Jeff Watanabe also plays a role as an entrepreneur. He and his colleagues put together their own law firm in 1971–this, straight out of law school. At this time, Watanabe Ing. and Komeiji Llc was the youngest of its kind which went head-to-head with the five biggest law firms in the state.

Watanabe’s first experience with the non-profit sector came at the age of 27–and like anything else that offers pleasure, he became hooked on community involvement and the fact that he is making a difference outside the entrepreneurial realm.

Watanabe talks about the phenomenal ‘generational change’ where people are more apt to try different things, taking risks and grabbing opportunities along the way. The tumultuous events of the 60s, the changing economic landscape of Hawaii and the influence of J.F. Kennedy to the young people have basically galvanized Watanabe et al to start their own law firm rather than join existing law firms at the time.

He claims that another generation change is taking place where young people are becoming more active in community involvement and social entrepreneurship.

Partner and principal Jeffrey N. Watanabe has been with the law firm since 1971. His practice concentrates mainly in hotel and resort development, communications, and general corporate law.

Mr. Watanabe received his Bachelor of Arts in 1965 from the University of California at Berkeley. His Juris Doctor was granted in 1968 from George Washington University Law Center in Washington, D.C.

Prior to joining the firm, he was Deputy Attorney General for the State of Hawaii, assigned to the Antitrust Division, 1968-69, and the Department of Commerce and Consumer Affairs, 1969-70. He also served as the State’s Chief Counsel in matters before federal agencies.

He serves on the board of trustees of the Consuelo Foundation, the Hawaii Community Foundation, HEI Foundation, The Nature Conservancy, Punahou School, Sesame Workshop based in New York and a variety of other civic and nonprofit organizations. He is a member of the American and Hawaii Bar Associations.

University of California at Berkeley
B.A. – 1965

1969 – 1970 Chief counsel for the State of Hawaii before federal transportation agencies including the Civil Aeronautics Board, Federal Maritime Commission, and the Federal Maritime Administration