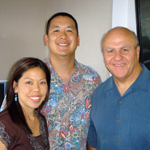 Sometimes people stop following their dreams to meet the practical demands of reality. And this is what senior VP and GM of KGMB TV, Rick Blangiardi did when he shifted his career from football coach to corporate executive to support the needs of his family.

Blangiardi might have lost a dream-turned-reality, but this did not stop him from being a facilitator of motivation and inspiration. Being positioned high up in the corporate ladder, Blangiardi believes in creating a challenging environment where employees can enhance their skills through the guidance of a mentor—the same principle he used as an assistant football coach.

Football played a huge role in Rick Blangiardi’s life. He was a player and eventually became assistant football coach and defensive facilitator for the University of Hawaii. Because of this attachment, the transition from coaching to communications practitioner was hard for Rick Blangiardi but his focus and determination to succeed eventually bore its fruits.

In this Greater Good Radio interview, Evan and Kari speaks with Rick Blangiardi about his career in football and what brought him to change his path to becoming a corporate executive. Blangiardi also talks about how he applies coaching and mentorship to motivate and inspire his employees. Adding to this is how he draws parallels between his career in sports and television.

Listen to the aftershow and find out how he handles the upbringing of his children and why gathering their respect has become his biggest life accomplishment.