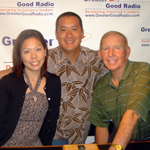 Retired Navy Captain Jerry Coffee has spent 7 years and 9 days as a prisoner of war in North Vietnam, mostly in solitary confinement. Captain Coffee, along with his comrades, endured physical and psychological torture, not to mention the agony of being away from home and loved ones.

To this day, his experience serves as an inspiration to thousands, or even millions, around the world—his story withstanding the test of time. Capt. Coffee considered those years under communist incarceration an episode that should be heard, and this became his purpose. Retiring from the military, Capt. Coffee started a civilian career as a professional speaker and author, sharing his stories to thousands of people across America and overseas.

Greater Good Radio has had the chance to hear first-hand Captain Jerry Coffee’s experiences as a military personnel, POW, keynote speaker, father and husband. Capt. Coffee talks about the importance of communication in our daily interactions with the people around us. He tells how the democratization of technology changes the way we communicate with each other, pinpointing its advantages and downsides.

30-minutes of motivational insights and inspirational words await our listeners, ending with four simple words, “Be in the moment.” Find out more only here on Greater Good Radio.

BIO:
Born in Modesto, California, Gerald (Jerry) Coffee joined the Navy in 1957 after graduating from UCLA with a degree in Commercial Art.

In 1962, during the Cuban Missile Crisis as an F-8 Crusader pilot , Jerry was awarded the Distinguished Flying Cross for flying low level reconnaissance missions over Cuba, taking the photos ultimately used by the United States UN ambassador to prove the existence of Soviet missiles there.

In February of 1966, while flying combat missions over North Vietnam, his RA5-C reconnaissance jet was downed by enemy fire. He parachuted safely but was captured immediately. For the next seven years he was held as a POW in the Communist prisons of North Vietnam. After his repatriation in February, 1973, Jerry returned to operation duties. He retired from active duty in the Navy after 28 years of service.

His military decorations include the Silver Star, two awards of the Legion of Merit, the Distinguished Flying Cross, two Bronze Stars, the Air Medal, two Purple Hearts, and the Vietnam Service Medal with 13 stars.

For the past 20 years, Captain Gerald Coffee, has been considered one of the nation’s top speakers, addressing thousands of people a year across a broad spectrum of corporate America and to international groups as well.

In his message of going “Beyond Survival,” Jerry draws not only from insights derived from the prison experience, but also from the perspective of his unique experiences since then: earning a masters degree in political science from Cal-Berkeley, studying at the prestigious National Defense University in Washington, D.C., Navy command and staff assignments, and his continuing interaction with hundreds of America’s corporations and associations as a professional speaker.

In a poll of corporate meeting planners, Captain Coffee was selected as one of America’s Top Ten Speakers. And, the prestigious Million Dollar Round Table selected him as one of its top twelve most popular, highest-rated, main platform speakers for the past 20 years.

He holds the National Speaker’s Association’s highest rating of CSP and membership in the Speaker’s Hall of Fame (CPAE).

His numerous civilian awards include the George Washington Honor Medal from the Freedom Foundation at Valley Forge.

Jerry is a highly respected commentator on current political, economic, and social issues, seeing most in terms of opportunities yet to be seized by heroic leadership. He has appeared on Larry King Live (twice), Talk Back Live, NBC news, and numerous radio and TV talk shows. His book, Beyond Survival, condensed by Readers Digest, is on audio-cassette by Nightingale-Conant, and was made into an award-winning play called “The Prisoner.”

Captain Coffee and his wife, Susan, a journalist, reside in Aiea, Hawaii. Between them they have a bunch of kids and grandkids and dogs. Their lanai overlooks Pearl Harbor and is directly across from Camp Smith where a giant American flag dedicated to America’s POWs and MIAs waves 24/7.