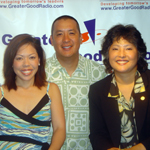 Being a mayor’s wife and a career person herself, it seems that there is so much pressure on Gail Mukaihata Hannemann, but apparently she enjoys every moment of her waking life. Gail Hannemann spent more than 15 years in Washington D.C. as congressional aide and professional staff member of the U.S. House of Representatives prior to moving to Hawaii in 1992. Married to Honolulu mayor Mufi Hannemann, Gail currently serves as CEO of the Girl Scouts Council of Hawaii and an active member of various community organizations.

When asked how it felt to be married to the mayor of Honolulu, Gail said that it made her life better in a sense that it became more organized yet stayed appealing. Their professional career, according to Gail, makes for an interesting conversation during the end of the day, which puts their relationship on even stronger ground despite their busy schedules.

Greater Good Radio brings to you, Gail Mukaihata Hannemann, CEO of the Girl Scouts Council of Hawaii and wife of Mayor Mufi Hannemann as she talks about her involvement with the State’s largest, girl-focused organization whose mission is to build “girls of courage, confidence, and character, who make the world a better place.”

In this interview, Gail shares how she manages to deal with and accomplish her tasks as a professional minus the detriments and benefits of being branded “the mayor’s wife”. She also speaks of her active involvement in the Arts and why she sees it as an important aspect of community development.

All these and more only here on Greater Good Radio. Listen now.

BIO:
As Chief Executive Officer for the Girl Scout Council of Hawaii, Gail Mukaihata Hannemann oversees Hawai`i’s largest, girl-focused organization whose mission is to build “girls of courage, confidence, and character, who make the world a better place.” Under her leadership, the Council is transforming its personal and leadership development model and operations to ensure that the Girl Scout Program remains inviting and relevant to not only today’s girls but also future generations.

Born and raised in California, Ms. Mukaihata Hannemann left the Golden State soon after graduating from the University of California at Los Angeles (UCLA) with a Bachelor of Arts degree in economics. She moved to our nation’s capitol where she spent most of the next 15 years as a congressional aide and professional staff member of a U.S. House of Representatives legislative committee. There she developed an expertise in the legislative process by primarily working to improve the social, economic, and political conditions of the U.S. insular areas.

Active in her community, Ms. Mukaihata Hannemann is the Chair of the Hawai`i Alliance for Arts Education (dba, Hawai`i Arts Alliance). It is the only statewide, non-profit organization that supports and advocates for all the arts and is part of the national Kennedy Center Alliance for Arts Education Network, a major program of the John F. Kennedy Center for the Performing Arts in Washington DC. The Hawai`i Arts Alliance represents 105 organizations and 300 individuals, with a combined statewide membership of over 35,000. Ms. Mukaihata Hannemann also serves on the Board of Directors of the Children’s Alliance of Hawai`i, a non-profit organization dedicated to making life better for sexually and physically abused children and their families living on the island of Oahu. She serves on the Steering Committee of the Hawaii Alliance of Non-Profit Organizations (HANO).