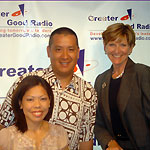 Joan’s self-competitiveness has brought her on top of some of the world’s most magnificent mountains—and her love for the outdoors and the challenge it offers translates into an effective business strategy. Joan, president and CEO of Hawaii’s foremost ‘virtual’ PR firm, applies what she learns from her mountaineering experience to the competitive world of public relations. 80 per cent of all mountain climbing accidents happen downhill, according to Joan, and like in business one must be on guard 24 hours, ready to take on anything that comes along the way.

This frame of mind has brought her firm to become Hawaii’s seventh largest PR company with over $1.4 million in revenue, notwithstanding a fairly minimal number of six employees.

Evan and Kari chats with Joan Bennet in this seemingly candid yet insightful interaction which brings to the limelight the latter’s experiences as an employee, businesswoman, and a outdoor adventurer. In this interview, Joan talks about why she started her own PR firm and how she thought about the concept of a ‘virtual’ office. She also shares with us her thoughts about community giving and how the Bennet Group contributes in uplifting the lives of those in need.

Joan imparts the lessons she learned as a member of the Peace Corps in Ghana and how this experience, along with her travel adventures, has opened her eyes and see the world from a different perspective.
More of Joan Bennet, president and CEO of Bennet Group Strategic Communications, only here on Greater Good Radio. Listen now.

 Has grown the firm to become a $1.4 million company, the 7th largest PR firm in the state (by revenue) with a team of six public relations professionals.

 Specializes in public affairs, advocacy, and public policy communications. For example, the firm’s “Clear the Smoke” campaign has helped reach thousands of residents statewide on the dangers of tobacco use, hopefully saving lives and making Hawaii a healthier place to live.

 The firm provides communications counsel on some of the top issues shaping Hawaii’s future: public education, affordable housing, public health, land use and economic development, among others.

Community Involvement
 The Bennet Group selects one deserving non-profit group and provides free public relations for one year. The 2005 recipient was the Domestic Violence Clearing House to Protect Battered and Abused Women.

 Joan personally serves on the Board of the Boys and Girls Club of Hawaii, and on the board of Hawaii’s 3 R’s – Repair, Restore and Rebuild Hawaii’s Schools.

Personal Background
 Joan has more than 20 years of experience in providing strategic public relations counsel to a wide range of clients in the U.S. and Asia Pacific region. She specializes in strategic planning, corporate and executive positioning, crisis communications and grass-roots advocacy campaigns.

 Joan was recruited to Hawaii by Hill and Knowlton in 1991 where she served as Public Relations Director and later Executive Vice President.
 She also worked for Hill & Knowlton in Sydney Australia from 1994 to 1995 as Public Relations Director.
 Previously, Joan was Communications Manager for the South Coast Air Quality Management District (1989 to 1991) and Public Affairs Specialist for the Southern California Gas Company (1981 to 1989).
 She graduated from the University of Southern California in 1981 with a BA degree, public relations major and journalism minor.
 She worked her way through college as a Media Relations Specialist for the USC News Bureau.
 Joan has won numerous communications awards for her work, including more than 20 Gold Quills from IABC, a PRSA Koa Anvil Award, and an Outstanding Women in Leadership award from the YWCA.
 She has lectured on communications and public relations at USC, UCLA, the University of Hawaii and the University of Sydney.