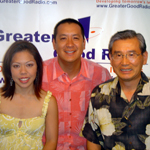 Don Kim did not let language and cultural barriers get in the way of his professional aspirations. This attitude, along with persistence and dedication, eventually led him to become Sony Hawaii’s top honcho. Coming to the islands from Japan in 1972, Don worked his way up the corporate ladder notwithstanding his minimal command of the English language.

With Don Kim at the helm, Sony Hawaii was able to increase its sales by 64 per cent from 2004 to 2005. This year, Sony sets their sales target to 250 million, thanks to the growing demand of the US Continental and PX military markets.

Born and raised in Korea, Don finds language to be a huge obstacle to his professional career although he is thankful that Hawaii maintains a multicultural society having no bias to ethnicity and nationality. This is one of the main reasons why he chooses to make the islands his home.

Don Kim, president of Sony Hawaii Company, shares with us how he has come to love Hawaii and why he opts to make the place his home after retirement. In this GGR interview, he talks about the values he learned as Korean military personnel and how these helped him in his professional career.

Don also mentions Sony’s involvement in the world of golf, and how the Sony Open contributes to the betterment of the State and the promotion of Hawaii as an idyllic tourist destination.

All these and more only here on Greater Good Radio Hawaii.