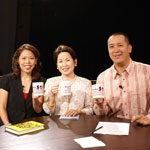 Vicky Cayetano is president and chief executive officer of United Laundry Services, Inc., which employs more than 300 associates and serves the hospitality and healthcare community through the provision of laundry services. She emigrated from the Philippines to the United States at the age of three and starred with Elvis Presley at the 1962 movie, “It Happened At The World’s Fair.”

Vicky deeply personifies female empowerment. Vicky is an accomplished businesswoman, ambassador of multi-ethnicity, and a leading advocate of child protection. As Hawaii’s former first lady, she spearheaded many of Hawaii and the nation’s programs designed to uplift the standard of living amongst the disadvantaged and the youth.

Vicky Cayetano believes that as a business leader, one needs to be available to his or her employees. To Vicky, providing motivation and inspiration to the workforce is an essential leadership performance that an entrepreneur or corporate officer needs to practice. She fulfills this by being hands on, interacting with both employees and clients, spending more time on the floor than in the office.

Despite many of Vicky’s successes in career and life, she maintains a very fundamental mindset of guardianship and care for others. Vicky is president and CEO of United Laundry Services and managing director of United Laundry Kona, but more importantly, she is a wife and mother of two hopefuls.

Vicky Cayetano chats with Evan and Kari, talking about the advantages of coming from a huge family, where she learned at an early age the value of sharing and the social skill sets needed to succeed in the dynamic world of business.

A leading businesswoman and community leader in the 50th state, former First Lady of Hawaii, Vicky Cayetano is widely recognized for her many accomplishments in business, cultural preservation, and promoting better health care especially for the elderly, women and children.

An ambassador in promoting multi-ethnic and multi-cultural relations, Vicky Cayetano was born in Manila, Philippines as the sixth of nine children. She immigrated with her family to the United States at the age of three, where she later attended Stanford University. She also made a movie with Elvis Presley in 1962 titled, “It Happened at the World’s Fair”.

As Hawaii’s First Lady from 1997 to 2002, Mrs. Cayetano set a new standard for
community involvement and participation. She spearheaded numerous programs to improve healthcare, including an effort in 2002 to provide universal long term care for all of Hawaii’s citizens.

In addition to lending her name and support to countless community and charitable causes, ranging from education, to economic development, to the environment, Vicky
Cayetano is also credited with establishing the Washington Place Foundation for the preservation of Washington Place. In leading the charge to restore and refurbish the historic residence, a focal point of the Cayetano’s mission was to “open up” Washington Place and its rich history to the people of Hawaii and the many visitors that come each year to our State.

Today, Mrs. Cayetano is President and Chief Executive Officer of United Laundry Services, Inc. and Managing Director of United Laundry Kona, LCC. With operations in Honolulu and Kona, the company employs more than 300 associates and serves the hospitality and healthcare community by providing laundry services to them.

Mrs. Cayetano credits her late father William Tiu and her mother Pat Tiu for giving her living examples of family values and a strong faith in God.

Mrs. Cayetano is married to Ben Cayetano, former Governor of the State of Hawaii and has two children, Marissa (22) and William (19). She and Governor Cayetano also have five dogs, Yuuki, Micky, B.J., Molly and Buster.