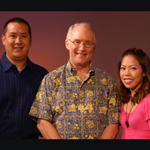 Retirement was the last thing in Mitch D’Olier’s mind as he ended his decade-long career with Victoria Ward, Ltd., in 2002. Mitch saw the opportunity of giving back to the community as he transitioned to become president and chief executive officer of Kaneohe Ranch and its non-profit arm, Harold K.L. Castle Foundation.

Mitch did not want his high energy to go to waste and thus chose to transfer this vigor on a more productive setting. He also felt that working in the foundation was too big an opportunity to turn down.

“I viewed the foundation as a gigantic force for making Hawaii better,” Mitch said. “I got to give back to Hawaii because Hawaii has given me all these incredible opportunities.”

“I could not come up with a better way to give back to Hawaii than trying to make the Harold Castle Foundation into a higher performing foundation than it already was.”

Greater Good Radio brings back Mitch D’Olier, president and CEO of Kaneohe Ranch and Harold K.L. Castle Foundation. In this interview, Mitch talks about the importance of listening, being the foremost step to being a good communicator, and its value to large organizations. He also talks about law being an unfair advantage to its practitioners, and why a lot of law degree holders end up in the highest rung of the corporate ladder.

Listen and find out more about Mitch D’Olier, only here on Greater Good Radio.

BIO:
H. Mitchell “Mitch” D’Olier was elected president and chief executive officer of Kaneohe Ranch Company, Limited and president and chief executive officer of The Harold K.L. Castle Foundation effective July 1, 2002. He was previously President and Chief Executive Officer of Victoria Ward, Limited from 1993 to 2002, and a member of its Board of Directors from 1992 to 2002. D’Olier was president and Chief Operating Officer of Hawaiian Airlines, Inc. and its related companies for a 22-month period from August 1991 through May 1993. Prior to Joining Hawaiian, he was a partner and management committee member of the Honolulu law firm of Goodsill Anderson Quinn and Stifel, which he joined as an associate in February 1972.

Kaneohe Ranch manages the real estate owned by the family trusts of Harold K.L. Castle and Alice H. Castle and their non-profit charitable foundation – The Harold K.L. Castle Foundation. The real estate portfolio consists of major land holding s located in Kailua on the windward side of Oahu, as well as other Oahu and mainland United States properties. The Kailua properties include commercial, retail, office, industrial and residential leasehold parcels.

The Foundation is the larges private foundation based in Hawaii. Grants are awarded to non-profit organizations benefiting the people of the State of Hawaii. Originally, the grants focused on the windward side of Oahu, youth, private education and healthcare. From 1992 through 2000, over $52 million was granted to organizations serving windward Oahu. The Foundation currently averages grant awards of $7.0 million a year.

D’Olier is a member and immediate past chair of the Hawaii Business Roundtable; a member and past president of the Rotary Club of Honolulu; member of the Board of Advisors and past president of the Boys and Girls Club of Hawaii; a director of The Harold K.L. Castle Foundation, Hawaiian Islands Ministries, The Oceanic Institute, The Bishop Museum, Hawaii Family Forum, Reyn’s Men’s Wear, Inc., and Hookakoo Corporation; a member of the advisory board of Catholic Charities Hawaii and Sea Grant in the School fo Ocean Earth Science and Technology at the University of Hawaii; and member fo the University of Hawaii Community Partnership.