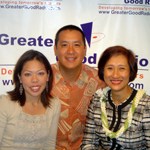 Connie Lau focuses on activities where she can add value – this is her key to successfully running to large companies. Connie’s keynote position for Hawaiian Electric Industries Inc. and American Savings Bank has set the tone for her to become one of the most powerful female business leaders in the entire United States.

To her, leading subordinates toward one direction, one goal is instrumental in effective governance.

Evan and Kari Leong bring Connie Lau back to the airwaves with more insights about being a woman in power and the responsibilities it entails – all these and more only on Greater Good Radio.

Connie believes in actively supporting the community and is a trustee or director of several educational and non-profit organizations such as Punahou School, Kamehameha Schools (Hawaii’s largest private landowner), the Hawaii Business Roundtable, Charles Reed Bishop Trust, the Consuelo Zobel Alger Foundation and the Maunalani Foundation. She is also a board member of Alexander & Baldwin, Inc. (NASDAQ – ALEX).

Connie earned her Bachelor of Science degree at Yale University, her juris doctor law degree from the University of California’s Hastings College of Law and received her Master’s in Business Administration from Stanford University’s Graduate School of Business. She is married to Russell Lau and they have three children.