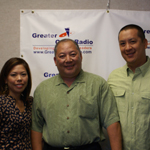 Chad Karasaki carries an incredibly huge responsibility as a business and community leader. He heads the Hawaii office of Marsh, the world’s largest risk management brokerage and consulting firm worldwide. Chad has overseen the successful payment of more than $50-million Hurricane Iniki claims.

Albeit national in scope, Marsh Hawaii understands as a firm that being involved in the community that it serves is greatly important, not only from the standpoint of business, but also individually. Within and outside his company, Chad serves as an example to many as a community advocate.

Chad states that it is an inherent obligation for able companies and individuals to charitably support the community.

“What we’ve seen over the years that we’ve been in this market place is there are not that many companies that have the ability to give at the levels that are necessary to sustain many of the charitable organizations in town, so it is incumbent upon those that can to really take the responsibility seriously and do so,” he said. “We do take it seriously and we’re happy to do that.”
Chad believes that community involvement and the social interaction it entails are more important in the scope of life than what people normally do earning a paycheck.

“Obviously we all got to earn, make a career and money, pay our bills, but what goes along with that, the relationships we forge and the community involvement that we’re able to do are as important or probably more important than what we do in a nine to five.”

Listen now and find out more about Chad Karasaki and his rise to the top – all with the significant guidance of a great mentor.

BIO:
Current Responsibilities
Chad specializes in serving our large hospitality, development, construction,
and retail accounts. He designs and implements insurance placements,
performs M&A due diligence, coordinates comprehensive programs,
and excels in resolving complex claims. He is the Head of our
Honolulu office.